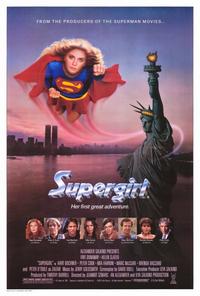 A question that sometimes comes up for debate is the idea of what exactly makes a movie a "comic book movie". There are the obvious features such as superheroes, villains, costumes, powers and such, but while there are obvious comic book choices such as The Dark Knight that seem to advance the genre, other films based on comics can fly under the radar and not live up to the potential of a well-written series. Green Lantern is a recent case of a comic book movie that didn't live up to expectations of the storytelling in the book. Below are five other comic book adaptations that failed to embrace and use the source material correctly, leaving a lot of unanswered questions and disappointment for fans. Supergirl: Perhaps the best example of comic book film adaptations not living up to the greatness of the source is 1984's Supergirl starring Helen Slater and Faye Dunaway. This super-powered cousin of Superman already had some degree of name and brand recognition and a rich history from DC, but the film botches her arrival on Earth and gives her a less than impressive foe in Dunaway's Selena, a frustrated witch. Magic is a weakness of the powered Kryptonians, but the lack of effort put into this angle is disappointing in the film, and the franchise never came to fruition. Supergirl was later killed in 1985's Crisis on Infinite Earths story, but this film was like a death as well. Tank Girl: Another great example of a shameful comic book film was 1995's Tank Girl, which starred Lori Petty in the title role. The film was based on a series of British comics that embraced and dealt with a range of issues and sociopolitical ideas and became an underground hit. The film tried too hard to cram in every conceivable film making element to try and make it work, but it collapses under its own weight, going for zany instead of brainy. The comic book series deserved better, and many think this film helped to kill Lori Petty's career as a leading actress. The comic did get some added publicity, so there is a silver lining. Howard the Duck: The cult Marvel Comics hero never looked so strange. In this adaptation, the film went for human actors with someone in a duck suit rather than an animated feature, and the effect has not aged well with time. While the comic books themselves may have focused on Howard as some sort of commentary on society, (sure), the film is more a lesson in horrible crafting. Even George Lucas' involvement couldn't save this piece, now considered one of the worst films ever. Howard still pops up in Marvel titles here and there, and hopefully he will stay there forever, unless a newer version of the film can help erase the 80s blight cast by its predecessor. The Surrogates: This is perhaps one of the more "star-powered" films to make this list, with actors such as Bruce Willis and Ving Rhames playing key roles in the film. The comic book series that the film is based on poses some interesting and complex ideas about disconnectedness and society, and our interview with series creator Robert Venditti, which you can read here, showed that. However, the film was not well-received, and relied too much on the visual effects of people living their lives through other bodies rather than experiencing the world for themselves. Potential was there, but the project as a whole collapsed under the weight of visual spectacle rather than storytelling. Jonah Hex: Perhaps the most current entry in this inglorious arena, this 2010 film was based on a rich and varied source from DC Comics. With over thirty years of material, this squandered effort was a flop at the box office, despite a starring cast of solid actors (Megan Fox notwithstanding). Part of the problem is the LESS than 90 minutes of story, which leaves the effort unbalanced and rush, trying to cram too many elements and characters into this film. While Jonah Hex has served as a gritty and rich story for decades now with a devoted fan base, this film treated it as an afterthought and delivered a less than stellar product in this vehicle that received multiple Razzie nominations. So what other films deserve to be on this list? What other projects don't live up to the expectations that they have from readers? Comment below!

THAT was a Comic Book? 5 Comic Book Films That Shame Their Source Material