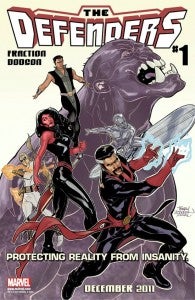 In an interview promoting his forthcoming Fantastic Four and FF runs, as predicted by last week's "Extended" and "Family" teaser images, Matt Fraction revealed to USA Today earlier this afternoon that his current Marvel team book, The Defenders, will end with the series' twelfth issue. Eagerly welcomed by fans and liked by most critics, Fraction's Defenders was a top seller for the first few months of its existence before settling in to numbers you'd more commonly associate with the title, which featured characters like Red She-Hulk, Dr. Strange and Iron Fist. From the article, which discusses Fraction and Mike Allred's eccentric spinoff FF, starring She-Hulk and Ant-Man along with a pair of new, female heroes:

She-Hulk has a pedigree with the team since she has been a member of the Fantastic Four, plus she'd be Ben's pick because she's "the one person he knew he could never lick," says Fraction, who writes Red She-Hulk in Defenders, which ends its run at issue 12 in November.