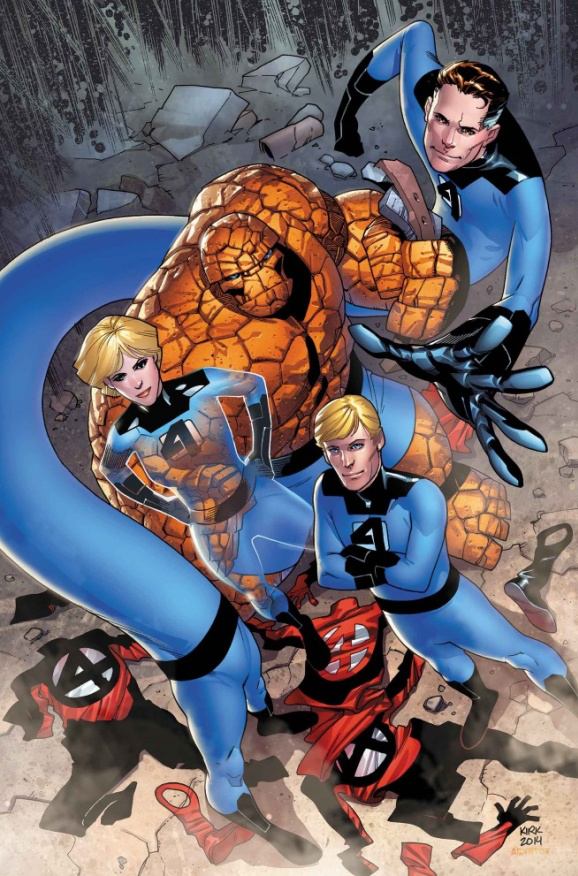 Ever look at a solicitation and wonder if anyone else noticed the characters, plot hints, or Easter eggs that you picked up on? Well, we've done just that for one of November's Fantastic Four releases so join us as we surf the solicits for you lovely comic fans out there.

Minor spoilers ahead, obviously, since we're dealing with the solicitation text for a book not due in stores for three months. 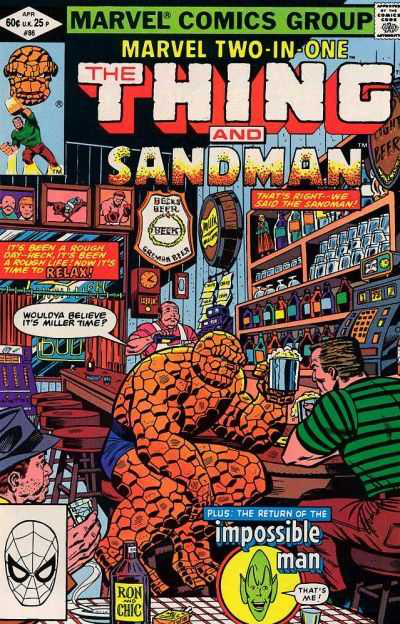 Looking over the solicitation text for Fantastic Four #13 by James Robinson and Leonard Kirk, you may have noticed the following phrase, "Can THE THING and SANDMAN escape from super villain prison?" Now, you might think that this is an odd pairing with Sandman traditionally being more of a Spider-Man villain. However, there are two things you need to remember though. The first is that Sandman is also a founding member of the Frightful Four, one of the Fantastic Four's oldest and deadliest teams of enemies. The second thing is that the Thing and Sandman have a history going back to the pages of the Thing's team-up series, Marvel Two-In-One.

In #86 of that series, the Thing basically convinces the Sandman to go straight. Yeah, that's right! Sandman has just recovered from a previous altercation where he became combined with Hydro-Man and goes to a bar to unwind. The bartender recognizes him and calls the Ben "The Thing" Grimm to put him in his place. When Ben arrives though, Sandman isn't looking for a fight, he just wants to drink his beer in peace and talk before the Thing takes him to jail. 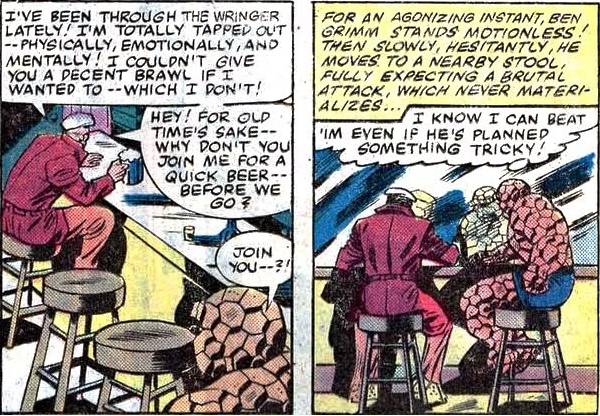 What follows are pages of Flint "Sandman" Marko and Ben exchanging their life stories and seeing that they have a decent bit in common.  Unfortunately, whereas Ben got plenty of breaks in life that helped form him into the hero he would become, Flint never seemed to have any lucky and was beaten down by life.  The issue ends with Ben saying that as far as the police are concerned the Sandman is presumed dead and he ought to stay that way.  He encourages Flint to turn over a new leaf and simply walks out of the bar leaving Flint to his thoughts. 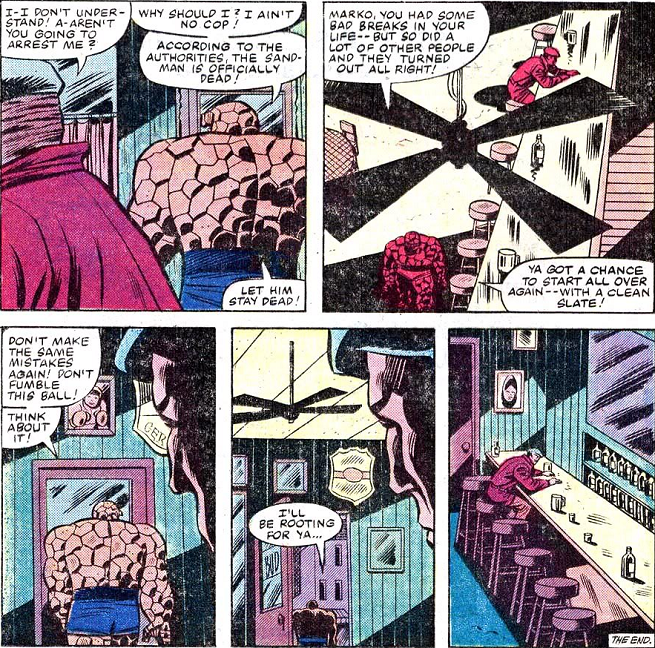 This newfound kinship between the Sandman and the Thing would be further solidified in Marvel Two-In-One #96. 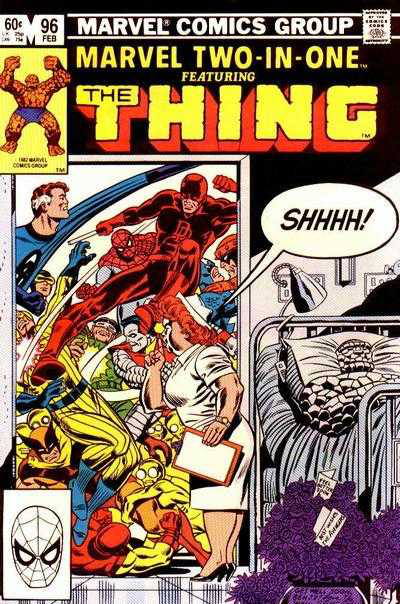 The Thing, in the hospital recovering from his fight with the Champion of the Universe, is visited by the Sandman. Throughout this whole issue, superheroes are defending the hospital from villains attempting to take out Ben while in his weakened state; however, there are continual shots of a shadowy presence sneaking through the building to his room. Luckily, it turns out to be Flint Marko with beer and cigars! 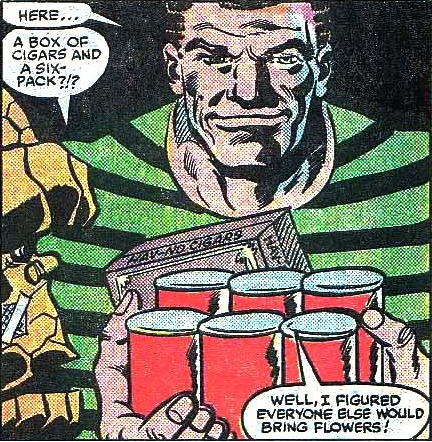 Flint explains that their earlier conversation had convinced him to go straight for which he was extremely grateful to the Thing. After a lovely few panels of the two tossing back a couple of brews and lighting up their smokes, the issue closes on Ben saying, "This could be the beginnin' of a beautiful friendship." Of course, later writers would contrived turn the Sandman evil again because sticking him back into the same role that he occupied for decades was more interesting than significant character development but who am I to complain? Anyway, I'm honestly hopeful that James Robinson will be playing with this past relationship and possibly revisiting a turn-to-good for Sandman. I've always loved these two issues of Marvel Two-In-One and it's always been a little depressing about how such a well-written and almost heartwarming couple of stories were thrown under a bus somewhere. 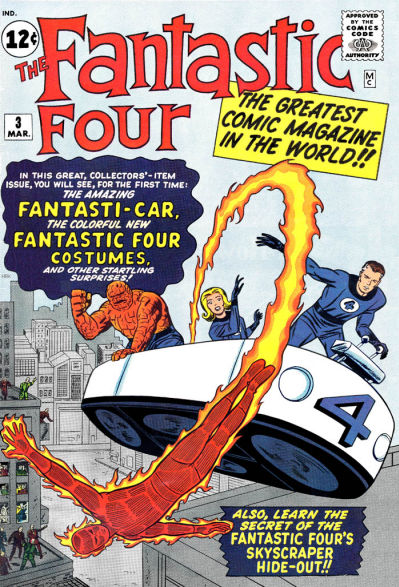 It's also worth noting that this issue features the return of the Fantastic Four's blue costumes, first seen in 1962's The Fantastic Four #3 by Stan Lee and Jack Kirby. It is worth noting that these costumes are very faithful to the Four's original appearance with the general blue shade; black accents at the belts, collar, gloves, and boots; and the chest emblem of a four on a white background. Also, the Thing gets back his swim-trunks look. The major change is the angularity of the accents, eschewing more rounded shapes of costumes past. One of these days, I need to write about the subtle evolution of the Fantastic Four's outfits. Unfortunately, today is not that day. 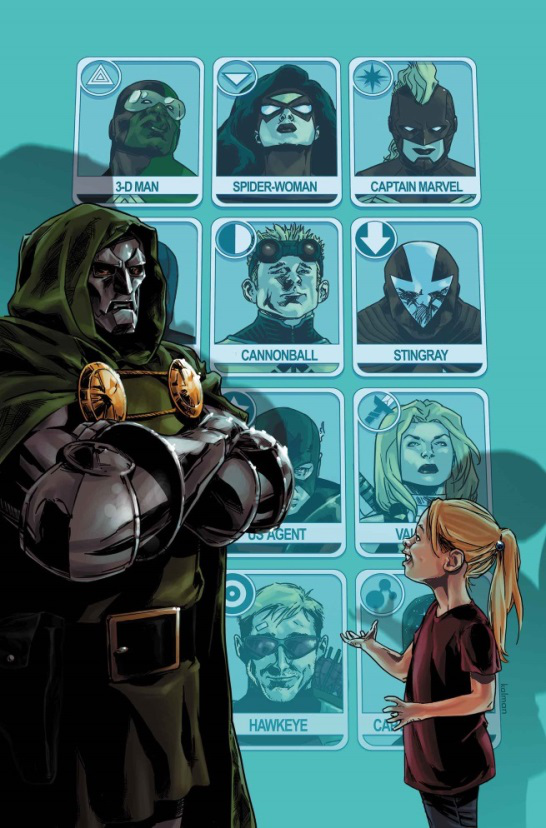 Changing gears and looking over the solicitation for Avengers World #15 by writer Nick Spencer and artist Marco Checchetto, I see that it promises a whole new team of Avengers recruited by Doctor Doom. What it doesn't mention is the identity of that little, blonde girl seen with him on the cover. Presumably, that is Valeria Richards, daughter of Reed and Sue who Doctor Doom delivered and named. The two of them share a special bond that appears to constitute the only genuinely caring relationship that Doom has been capable of having, surpassing even the one between Doom and his adopted heir Kristoff Vernard. Valeria chose to stay with Doom in Latveria following the events of Matt Fraction's run on Fantastic Four and FF hoping to take advantage of Doom's downfall in those arcs to make him a better man. I wonder how that's working out…

Thank you for joining me for another installment of Surfing the Solicits and yet another master class in "Fantastic Four History You Might Not Know but May Improve Your Enjoyment of Future Issues." Happy comic reading!

The Fantastic Four Get Their Blue Costumes Back, And Other Easter Eggs and References In November's Solicitations