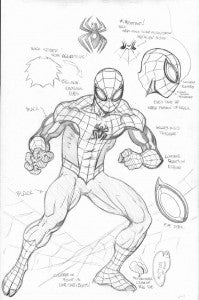 Earlier today, The Amazing Spider-Man writer Dan Slott talked to the media about his upcoming series The Superior Spider-Man, and both he and the reporter danced around the question of whether Peter Parker was still Spider-Man or not--and still alive or not. Now, in a formal statement from the publisher, it appears as though Marvel and Slott have confirmed that the hero at the heart of The Superior Spider-Man is, in fact, not Peter Parker...although he's apparently someone who has some experience superheroing. "Peter Parker has spent a lifetime living up to the responsibilities his powers foisted upon him but his Amazing story finally ends dramatically in the historic Spider-Man #700," Marvel said. "NOW! the new Spider-Man has arrived and he is better in every single way. Smarter, stronger…Superior." "This is still very much the world of Spider-Man. There may be a new Spider-Man here, doing things in a new and different way, but you're going to see the Spider-cast reacting to this," Slott. "You're going to see how this Spider-Man will deal with our Spider-Man's villains. How will he react to this Spider-Man's supporting cast? That is clearly the world of this book. The world hasn't changed, just the hero." "Spider-Man has learned a lot during his time as a super hero, making him not just amazing anymore, he's more than that," said Axel Alonso, Editor In Chief, Marvel Entertainment. "Dan and Ryan have Spider-Man on a path that will challenge him in every way. Just because Spider-Man is Superior, it doesn't mean things are even close to getting easier!" More on this over the weekend, surely.

The Superior Spider-Man Seemingly Confirmed as Not Peter Parker