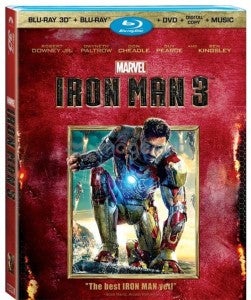 Marvel Studios have announced the special features meant to appear on the DVD and Blu-Ray releases of Iron Man 3, set to hit the stands on September 24, will reportedly include a sneak peek at Thor: The Dark World but so far has no listing for the previously-announced Marvel One Shot starring Peggy Carter. Given the fact that Hayley Atwell, the actress who played Carter in Captain America: The First Avenger, was recently spotted on the set of Captain America: The Winter Soldier, could it be that her story either needed some fine-tuning or took on a different form? We've got an inquiry out to Marvel. It's also worth noting that up to this point, sites like Video ETA, who track the release dates for upcoming movies, have the September 24 date blocked out for the DVD but no listing for the Blu-Ray. It could be that this list of Blu-Ray features is incomplete. Here's what the Blu-Ray is said to include:

And the first two of those items are supposed to be on the DVD, as well. Bleeding Cool further reports that--at least in the U.K.--digital copies and features will be available effective September 3. That will likely be when the Wal-Mart preorders (which promised early digital access) begin to populate into buyers' Flixster accounts.