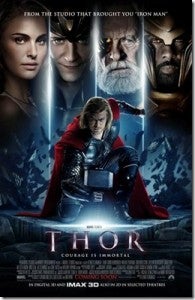 For a debut film about the iconic Norse god of thunder and unique Marvel super hero, Thor pulls on some standard cliches in this almost two-hour origin story that details the fall and rise of a god who would be a champion on two worlds. Starring Chris Hemsworth, Natalie Portman and Anthony Hopkins, Thor does enough right to save itself from being a terrible first film in a supposed franchise, but it does fall into the trap of trying to force too much too quickly on its audience, despite some fantastic action sequences and visual spectacle. The movie has a crackling opening, literally, as Natalie Portman, playing Dr. Jane Foster, an astrophysicist, encounters a man, Thor, who appears out of nowhere in the middle of a tornado/storm in New Mexico. The film then quickly weaves a tale straight out of Norse mythology, with the gods of Asgard, Thor's home, doing battle against the savage Frost Giants, with nothing short of the fate of the nine worlds, Earth included, at stake. The film hits hard, loudly and impressively as we are given the origin of how this god came to Earth. The brute power of the gods and giants is on display here, and it's the first of several interesting battle scenes throughout the film. The opening visuals of Asgard and the land of the Frost Giants are impressive and imaginative, if not a little too "CGI-ish" at times. Hopkins as Odin, chief of the gods and father to Thor and Loki, played by Tom Hiddleston, is appropriately grave and majestic in the role of patriarch, tasked now with choosing a successor to his throne. Just before Thor's coronation, the Frost Giants attack, hoping to reclaim an ancient weapon long since lost to the Asgardians. Ignoring his father's advice, Thor, Loki and the Warriors Three set out for the land of the Frost Giants to teach them a lesson. Another impressive battle scene, this time displaying the cool factor of Thor's powerful hammer Mjolnir, breaks out, and Thor's destruction of the uneasy truce between his father and the Frost Giants costs him his place in Asgard and his power. Odin casts him out, and Thor falls to Earth where Foster discovers him. Now on Earth, Thor must figure out how to live as an exile. It's here that the movie starts to lose its effectiveness. Foster, despite her bewilderment at a man calling himself the god of thunder, develops predictable feelings for him, and the same in Thor's case as he sees her passion and dedication to her work in finding out more about the strange patterns and physics that brought Thor to this world. This is made the more intense by the government taking all of her research and work in light of the crash-landing of Thor, and a very powerful hammer, on Earth. He sees in her, over just the span of a couple of days, mind you, a strong and capable woman, and the budding romance seems a bit of a distraction from the main action of the story. Back on Asgard, Loki's character becomes more and more interesting. Those already versed in some Norse mythology know that Loki is the god of mischief, and it's in that context that the plot gets more interesting. Through a series of surprise discoveries, Odin's falling into a period of rest and Thor's exile, Loki is now king, and he uses that role to further Thor's humiliation and unfold his own plan for Asgard. Hiddleston is wonderfully cast as Loki, especially in the way he allows Loki's treachery to slowly build and reveal itself over the course of the film. Even his physical acting keeps Loki's true nature close to the vest until it's time for him to show his full evil. Loki unleashes a creature called the Destroyer on Earth, and Thor is forced to prove himself worthy, with the help of the Warriors Three and Sif, to become a god again, and in a fast but brutal battle with the Destroyer, he does just that. It's a classic "road to redemption" story, but even though it's predictable, it's necessary for Thor's development and his return to Asgard to confront Loki. The final showdown with Loki is one of the highlights of the film. It's an epic battle on Asgard between two gods, using weapons of the gods, on the Bifrost bridge, the rainbow that connects the worlds and allows travel between them, and sibling rivalry all rolled into one. It's a titanic battle that fortunately lasts more than just a couple of minutes, with a couple of interesting twists thrown in. The film ends with order restored in Asgard, Earth protected, and Thor back amongst the gods. Overall, Thor works when it relies on its characters to play around in the action and the backdrop in which they have been placed. The battles are fierce, clamorous and designed to draw the viewer in to the spectacle of another world inhabited by super beings. Thor's battles and hammer-wielding are impressive, and Hiddleston steals the show as Loki. Portman is appropriate as Foster, but the cliche of the love interest, while it might help in setting up a sequel, detracts from the film's overall story and meaning. Hemsworth IS Thor. He visually has the look, he commands the screen with his presence, and his mannerisms and power suggest his position as a god. It's just a shame that the entire film couldn't have been as consistent as the players in it.

"Thor" Thunderously Middle of the Road