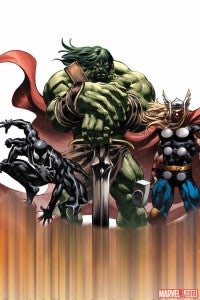 At Marvel's Next Big Thing panel, the final panel of the week, there wasn't as much status-quo shattering to be done as in previous panels (like their Talk to the Hat panel, which saw two major new series announced, or their digital panel on Friday), but they did have some creative shakeups and other such goodness to announce. The first such announcement was that Dark Avengers #175 will hit in June and feature a lineup change on both the creative end and with regard to the characters inside. Luke Cage will lead a time that includes Skaar, Ragnarok and more. It will be written by Jeff Parker, with art by Kev Walker and Declan Shalvey; the first issue's cover was made available and is by frequent Marvel cover artist Mike Deodato. Jason Aaron's previously-announced Incredible Hulk story, "Stay Angry," was next up, with the announcement that while Steve Dillon will draw Incredible Hulk #8, the second part of the story will be drawn by Pasqual Ferry. Meanwhile, over in Hulk, Dale Eaglesham joins the team starting with June's Hulk #53. The story, called "Mayan rule," will feature Alpha Flight and War Machine. A gallery of Eaglesham's Hulk art, made available at the convention, can be seen below, along with Dark Avengers and X-Men/Ultimate Comics X-Men covers. Brian Wood, meanwhile, is a busy guy these days. Following the end of his Vertigo series DMZ, he started The Massive and Conan the Barbarian at Dark Horse Comics. He'll continue on both of those titles, while taking on both X-Men and Ultimate Comics: X-Men for Marvel.  Art on Ultimate Comics X-Men will be handled by Carlo Barberi, while the 616 X-Men title will be drawn by David Lopez. The series will have an "espionage" feel to it, perhaps coming out of the events of Avengers vs. X-Men, which Wood discusses more at Comic Book Resources. Sam Humphries, meanwhile, attended his first-ever Marvel panel as a creator and was announced as the incoming writer of Ultimate Comics: The Ultimates, which is Marvel's Avengers title for the Ultimate Comics set. Marvel's Ryan Penagos also told fans that there would be a major Ultimate Universe announcement later this summer--presumably at Comic-Con in July. [gallery link="file" columns="2"]