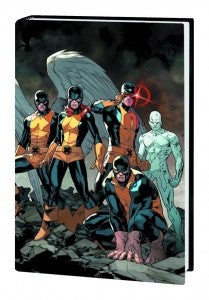 Wolverine's imperfect, teenage, female clone X-23 will apparently survive her ordeal in Avengers Arena and stick around to join the All-New X-Men, giving the "first class" version of the team the closest thing they could have to an age-appropriate Logan. "We're going to have some big All-New X-Men news for you at the end of the panel," X-Men editor Nick Lowe told a panel audience at New York Comic Con today, "but one character we'll tell you who is joining the book is X-23." "Nick doesn't mind spoiling Avengers Arena with that cover," added Dennis Hopeless. And while her father has always had an unstable romantic history and a penchant for pining over Jean Grey, a woman whose heart long belonged to Cyclops, the daughter...well, she went another direction. 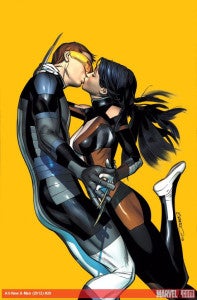 We're preserving the spoilers here, but if you go beyond the jump, we can't be held responsible for that. The image below was projected on the wall at New York Comic Con and will likely be all over the Web soon anyway. That's right; her dad always liked Cyclops's girl, but X-23 went with Cyclops himself. Given that she'd been around for years in a world where Cyclops was about 20 years older than her and traveled in her circle of friends, it's only icky if you think about it for more than a minute.