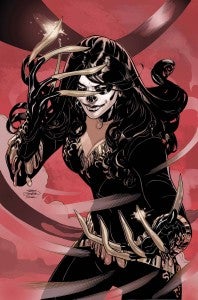 This month's issue of X-Men is the beginning of the true second story arc for the series after being co-opted by the Battle of the Atom crossover following its debut story. The first issue of "Muertas" ushers in the return of Lady Deathstrike, who has found a new, temporary host body but has her eyes on a much more powerful body for the longterm; that of Omega Sentinal, Karima Shapindar. This issue is much more character focused, quiet and in line with what fans expect from a Brian Wood story than the series' opening storyline, which was primarily a lot of big action set pieces. It starts with Lady Deathstrike taking over the body of Ana Cortes, a young Colombian heiress to a sizable family fortune. We don't receive any real explanation as to why young Cortes agrees to let Lady Deathstrike inhabit her body, and maybe that will be explored further in future issues, but she seems quickly forgotten in this issue and more like a story half-conjured just to bring Lady Deathstrike back from oblivion than she does a real character of her own. Meanwhile, Jubilee is still trying to adjust to life as a single mother with baby Shogo, getting help from Storm in trying to legally adopt the child. Conveniently enough, both the Hungarian and United States governments seem to find no reason to press charges against a young girl who kidnapped an infant and smuggled him across national boundaries into another country, and have even decided to grant her legal custodial rights, because her actions so far have shown her to be exactly the kind of stable, responsible, international criminal who can take care of a young boy. Its a bit of a stretch, and feels unnecessary. Wood could have just chosen to gloss over the legal issues of Shogo's "adoption" and no one would have thought twice, simply assuming that the X-Men were hiding him or had otherwise "taken care of it." By bringing up specifics, he's only inviting readers to scrutinize the unlikely logic and circumstances involved with Jubilee taking the child in. The conversation is interrupted by the arrival of Monet, who is looking to lay low and collect herself following her time with X-Factor Investigations. She and Jubilee immediately begin to butt heads in a way that fans of the old Generation X series will find familiar. Monet should prove an even better foil for Jubilee than in their Generation X days as she is a prime example of a teen hero who has matured over the years, while Jubilee's vampirism has trapped her in a state of eternal adolescence. "Forever the student," as Monet points out. Karima Shapindar is still recovering from the events of the series' debut, in which she was taken over by John Sublime's technopathic "sister," Arkea. Wood gives readers a real sense of what Karima is going through, a kind of reconstruction of body and soul now that her sentinel enhancements are dormant, but also a hope that this is a chance for her to pick up her normal life as a police officer from where she left it and maybe redefine her role within the X-Men. It comes out in her dialog with Beast as well as in her quick bonding with Monet over the recent near death experiences that hey have both suffered. Of course, there's a still a bit of action, as Lady Deathstrike makes her first brash attempt at recovering the Omega Sentinel body. Terry Dodson draws it well, using a lot of close shots to make everything feel appropriately chaotic. It borders on being too cluttered, but it works and still makes more sequential sense than the earlier action scenes from Olivier Coipel. Dodson's art is quite a departure from what Coipel established in the first three issues. Where Coipel drew characters with sharp features and a sleek style, Dodson draws characters with much softer, rounder features that are defined by Rachel Dodson's bold inks. Jason Keith's colors are fairly simple, but he has a great sense of composition, making each page feel like a cohesive whole. Together, the art team creates an attractive and smooth look that is quite distinct from what came before. We get one more brief character scene before the book's end, this one between Jubilee and Bling. It finally sheds some light on the altercation that took place between Bling and Mercury in the first issue, and seems to suggest that Brian Wood is thinking about this X-Men book in the long-term, planting seeds of story and relationships that will take some time to blossom. The X-Men work best when a creator has time to really get to know the characters and really get deep into their relationships with each other, so its great to see signs of this kind of planning. Its a solid start to X-Men's second storyline. The fresh artstyle and solid character writing takes the attention off of the incomplete or not entirely believable aspects of Wood's plot. With Battle of Atom done, it is easy to look forward to seeing what this X-Men series is really all about.