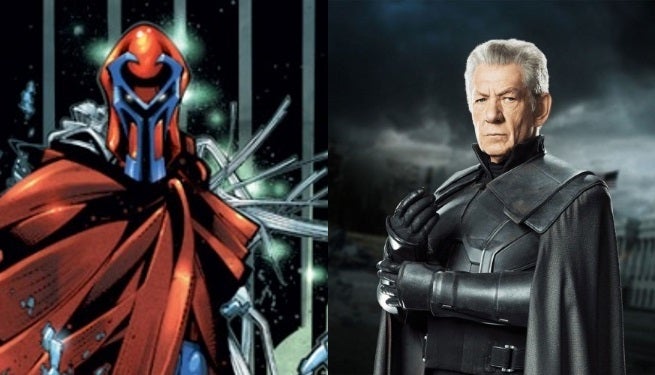 Patrick Stewart recently let slip that Ian McKellen will be reprising his role as Magneto in X-Men: Apocalypse. Fox hasn't yet confirmed Stewart's assertions, but Stewart seemed pretty confident in his statement.

So, assuming Stewart is correct and McKellen will appear in X-Men: Apocalypse, what role might he play? It's a little hard to figure out at first. X-Men: Apocalypse will take place in 1983, and Michael Fassbender is set to play young Magneto once more. So where does that leave the elder, future Magneto? Specifically the elder Magneto without the elder Xavier.

X-Men: Days of Future Past introduced the concept of time travel to the X-Men movie universe. Given Apoocalypse's immortal nature, perhaps we'll see Magneto among the last mutants fighting against En Sabah Nur in the distant future.

Or perhaps we'll see a cinematic version of the Age of Apocalypse timeline. The Age of Apocalypse timeline was created when Professor X's son, Legion, travelled back in time to try to kill Magneto and accidentally killed Xavier instead. As a result, Magneto forms the X-Men in his friend's honor, but not in time to stop Apocalypse's rise to power. From there, Apocalypse conquers the western hemisphere, and Magneto's X-Men are forced to become guerrilla rebels fighting against his reign.

It seems unlikely that the film would delve into "Legion Quest" territory, but perhaps the idea will be adapted and wrapped around X-Men: Apocalypse. There's no need to travel back in time to prevent Xavier from forming the X-Men, because we're already in prequel territory. The film could pose Apocalypse as a threat to young Xavier's life, just as he's trying to put the X-Men team of the original films – Cyclops, Jean Grey, and Storm – together for the first time. McKellen's Magneto could be used in a scene, or scenes, that show the consequences of Xavier's death.

So perhaps we'll get to an alternate film universe timeline, with Ian McKellen's Magneto leading the X-Men in a post-apocalyptic (sorry) North America. If this ends up being the case, it could even open up the door to cameos from other past X-Men films stars, showing what would have become of their characters if they were trained and raised by Magneto under such catastrophic circumstances.

As to how this future is revealed, perhaps this is how Cable, the mutant with more history with Apocalypse than any other, make his film debut. Cable comes from a future where Apocalypse rose to power (a different future than the Age of Apocalypse timeline) and originally travelled back in time to prevent that rise. It seems plausible, if Fox is ready to introduce the character, that he could travel back and recount details of his future to the 1983 X-Men, triggering the flashback/forward scene involving McKellen. This would also leave Cable open to appear in the long rumored X-Force movie.

So…that's a lot of speculation. I realize I've kind of built a cabin out of a single log here, but I don't think anything about this line of theorizing is particularly objectionable or unreasonable, and there's nothing here I wouldn't like to see if it turns out to be true.

We'll have to wait and see how it all pans out when X-Men: Apocalypse opens in theaters May 27, 2016.