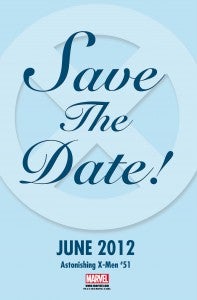 Marvel Comics circulated a "save the date" card yesterday, announcing a wedding for Astonishing X-Men #51. The issue, which will be released in June, will be the fourth issue of new writer Marjorie Liu's first arc on the title--an arc which, according to a Q&A she did at Marvel.com, "will change the lives of these characters...forever." While the identities of those getting married has not been identified, but a columnist on the Marvel Comics Examiner indicated that sources inside Marvel had told him that it would be Northstar and his boyfriend Kyle, marking the first gay marriage involving a Marvel superhero. Northstar was Marvel's first openly gay superhero after he came out in 1992; his sexuality before that had been depicted as ambiguous, but both Marvel policy and the Comics Code Authority would not tolerate the character being out of the closet in the '70s and '80s. For him to be the first to be married would make sense. Gay marriages have been the talk of the week in comics, with Life With Archie #16 (which was set in the future and featured Kevin Keller's wedding) selling out all over the country in spite of boycotts by conservative social and religious groups.