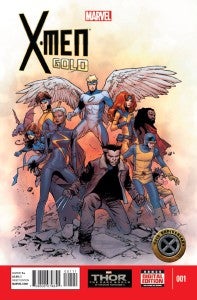 Marvel Comics continues to celebrate the X-Men's 50th anniversary with the aptly named X-Men Gold, an anthology featuring a handful of classic X-Men creators telling short stories set during whichever X-Men era they are most associated with. Its a nice throwback for longtime fans of the X-Men who will get a bit of well-crafted nostalgia for times gone by. The first and longest story in the anthology is written by the creator most responsible for the X-Men's fifty years of success, Chris Claremont, and illustrated by the co-creator of the New Mutants, Bob McLeod. Kitty Pryde reprises her familiar role as point-of-view character for the tale, set immediately after the X-Men's trip to Japan for Wolverine's ill-fated wedding. The X-Men see signs of trouble in China on their global scanner and jump into action. They arrive to find a gigantic sentinel storming about and causing chaos. Naturally, a battle ensues. Its a pretty simple tale, but Claremont chose the perfect time period to set it in. It allows for cameos from some of his favorite supporting characters - like Lilandra, the Starjammers and Madelyne Pryor - but, more importantly, its an era absolutely soaked in the character-focused drama that was Claremont's stock and trade. Rogue, still new to the team after leaving Mystique's Brotherhood, slowly bonds with her new teammates, particularly Nightcrawler, who is better written and characterized in this story than he has been in twenty years. Meanwhile, Kitty helps Wolverine move on from the unfortunate events of his wedding in the kind of heartfelt scenes that used to be the rule for X-Men stories rather than the exception. McLeod's art feels, similarly, like something out of a different  time and is sometimes at odds with the modern style of coloring. His characters have strong features and are more cartoonish and less realistic than the style employed by many modern superhero artists. His panels feel a bit crowded and the layouts are a bit hard to follow at times, but there's a lot of action on display in this story, so these are minor and forgivable sins. The story feels like it could have been an unpublished issue of Claremont's original run, and while that style didn't go over so well when he returned to the books years ago, its a pleasure in this small dosage. The story will have fans quickly reaching for their Clarement penned omnibus, Marvel Masterpieces, or Essential volumes. The rest of the stories are much shorter, starting with "The Sorrow Beneath the Sport!" Stan Lee, one of the original creators of the X-Men, scripts this story, which was plotted by Louise Simonson. Obviously the other co-creator, Jack Kirby, couldn't return to draw the story, so they got the next best thing with Walt Simonson. The story's plot has the male members of the original X-Men racing to the Danger Room to win a date with Jean Grey, which is exactly the kind of silly story that made most of the original X-Men run so forgettable. Really, the story is a showcase for Simonson's expressive and kinetic art, which owes much of its style to Kirby, and for Stan Lee's trademark dialog, which remains as charming as ever. Roy Thomas's tale of a chance meeting in Memphis between Sunfire and Banshee, a mere two days before the events of Giant-Size X-Men #1, is the least of all the stories presented here. Not much more happens than a typical superhero "meeting leads to misunderstanding leads to fight scene" type plot, and the chemistry between the two characters as they bond afterwards is strained, but Pat Oliffe's sharp artwork and Chris Sotomayor's colors at least makes it nice to look at. "Options!" is a fun story, written by Len Wein with fantastic artwork by Jorge Molina, that takes place during Giant-Size X-Men #1. Its a look inside the head of Wolverine, Wein's creation, as he imagines how he could defeat all of the other members of the new team of X-Men now that they have assembled at the mansion for the first time. It's a great reminder of Wolverine's early days and why he got to call himself "the best at what he does." Molina makes all the imaginary violence look like a beautiful all-ages story with lush colors and slightly exaggerated character models. Hopefully we'll see him drawing more mutants in the future. The final story is "Dreams Brighten," written by Fabian Nicieza, one of the primary X-Men writers of the '90s, with art from Salvador Larocca, whose style looks much more like his X-Treme X-Men days than his darker Invincible Iron Man work. Its hard to explain what happens in this story without spoiling it, but if your not pretty familiar with the major X-Men stories of the 1990s, particularly Fatal Attractions, then there is a good chance the story will makes absolutely no sense to you. Its kind of a sick genius on Nicieza's part since that kind of impenetrable, continuity-heavy storytelling defined X-Men comics in the '90s. It sort of works, but you can't help but feel that it shouldn't. X-Men Gold is a treat for X-Men fans. It feels like a photo album for the X-Men franchise, with each story a picture that perfectly preserves what X-Men stories were during that period of time, despite the fact that each story was written only recently. Fan service? Maybe, but its very well done fan service if it is.