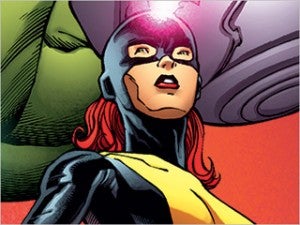 After yesterday's promise that there would be more to come today, Entertainment Weekly's print edition is reporting that as part of the Marvel Now relaunch, the five original X-Men will travel forward in time and star in a new, Brian Michael Bendis-written X-title called (presumably with tongue at least somewhat in cheek) All-New X-Men. Quotes Bleeding Cool:

ALL NEW X-MEN: Brian Bendis takes on the most eccenctric and controversy-baiting Marvel NOW! book. The pitch: The original five teenage X-Men time-travel to the present day. "Here's the big question that the original X-Men are gonna be faced with: 'We're gonna grow up and this is what we're going to to get? That is not acceptable." NOV. 2012

This explains the presence of Jean Grey, a character who has died and returned so many times that it's got to just be an inside joke at this point around the Marvel offices, and allows Bendis to write the iconic character without actually being the forty-third guy to bring her back from the "dead." Asked on Twitter what he could share with the fans about the notion of Jean returning to the modern-day Marvel Universe (even if it seems only temporary), Bendis said it was "waaay to early to start dropping reveals, but i will say this is about as exciting a project as i have ever had my hands on." After thanking the fan, Bendis (who is apparently a big fan of the '90s X-Men animated series) added, "JEAN!" Bleeding Cool suggests that the series will ship bi-weekly and will feature a rotating art team including Stuart Immonen, Brandon Peterson and Leinil Yu. They also claim that during her stay in the current-day 616 Universe, Marvel Girl would (as we predicted yesterday) be appearing in Uncanny Avengers.