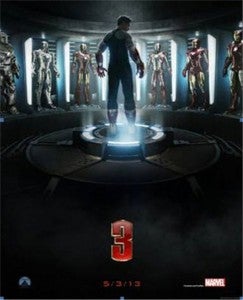 With the NFL playoffs in process, football fans can start looking forward to Super Bowl XLVII, which is scheduled to take place in New Orleans on February 3, 2013. And with Super Bowl XLVII, comic book fans can look forward to new comic book, science fiction, and action/adventure movie trailers. It has started to leak out which studios officially bought airtime during Super Bowl XLVII, and Comicbook.com has compiled some predictions. So far Paramount, Universal, and Disney are the only studios confirmed to have bought air time, but there could be others that are keeping it secret. Here are seven movie trailers that we think will air during the 2013 Super Bowl. Fast And Furious 6 – This is one of only two movie trailers that has been officially confirmed for the 2013 Super Bowl, as Vin Diesel announced via his Facebook page that the Fast Six trailer would debut during the Super Bowl. Fast and Furious 6 is set to be released in movie theaters on May 24, 2013. Oblivion – Since we know Universal is buying Super Bowl air time for Fast Six, it would be crazy for them not to also buy air time for Oblivion. With Tom Cruise talking about the last Super Bowl during the already released Oblivion trailer, a commercial featuring that footage should be a no-brainer for Universal. Oblivion is set to be released in movie theaters on April 19, 2013. Iron Man 3 – The Avengers movie trailer aired during the Super Bowl, and The Avengers went on to become the highest grossing movie of 2012. Superheroes and football play nicely together, and Disney will want to repeat the magic with Iron Man 3. Iron Man 3 is set to be released in movie theaters on May 3, 2013. Oz: The Great And Powerful – Disney is usually a major Super Bowl advertiser, so we should expect to see a couple of their movies promoted. Iron Man 3 is probably a sure thing, and Oz: The Great And Powerful is also very likely. With a March 8, 2013 release date, the timing is right for Disney to promote this film during the Super Bowl. Star Trek Into Darkness – Besides Fast and Furious Six, Star Trek Into Darkness is the only other movie trailer that has been confirmed for the 2013 Super Bowl. The buzz has been really good among fanboys over the first Star Trek Into Darkness trailer, and Paramount will want to get more eyeballs on a trailer for what looks to be their biggest summer movie. Star Trek Into Darkness is set to be released in movie theaters on May 17, 2013. G.I. Joe: Retaliation – Paramount promoted this film during the last Super Bowl, so why not promote it again. Paramount has a lot riding on getting this franchise going, so they will want to make sure viewers get a look at their new trailer. G.I. Joe: Retaliation is set to be released in movie theaters on March 29, 2013. World War Z – While Star Trek Into Darkness will likely be Paramount's biggest summer movie, World War Z will likely be their second biggest. We predict that Paramount will go for the triple play and promote at least three movies during the Super Bowl. World War Z is set to be released in movie theaters on June 21, 2013. While we feel pretty confident in predicting the seven movie trailers above for 2013, there are a couple more movie trailers that we would like to see that we don't feel as confident about predicting. 20th Century Fox and Warner Bros. sat out last year's Super Bowl, and it's probably likely they will sit out this year's Super Bowl as well. However, 20th Century Fox has two movies that would work really well as Super Bowl commercials, and Warner Bros. has one that would be a super good fit. A Good Day To Die Hard – A Die Hard movie just seems like the perfect fit for the Super Bowl. With a February 14, 2013 release date, the timing would be perfect for 20th Century Fox to promote this film. The Wolverine – With Iron Man 3 and Man of Steel already having whipped comic book fans into a frenzy with great trailers, The Wolverine has a lot of ground to catch up. Everyone is wondering why a trailer hasn't been released for The Wolverine yet. Could 20th Century Fox be saving it as a Super Bowl surprise? The Wolverine is set to be released in movie theaters on July 26, 2013. Man Of Steel – How can Warner Bros. not advertise a Superman movie during the Super Bowl? The Man Of Steel trailer has been generating great buzz among comic book fans. Warner Bros. will be missing the boat if they don't share some Superman footage with the football world. The Man Of Steel is set to be released in theaters on June 14, 2013. And finally, we though we would add two longshots to the list. These two movies don't come out until later in the year, so we're not expecting them to advertise during the Super Bowl. However, it would be a nice surprise if the first ever trailers for these two films did premiere. Hunger Games: Catching Fire – Last year, Lionsgate promoted Hunger Games during the pre-game show, and things seemed to work out pretty well for them at the box office. With Hunger Games: Catching Fire not set to be released until November 22, 2013, it's doubtful that Lionsgate will have a trailer ready for the Super Bowl. But wouldn't it be a great surprise if they did? Thor: The Dark World – Like we said above, Disney is usually a big time advertiser during the Super Bowl. Thor: The Dark World isn't set to be released until November 8, 2013, so we doubt a trailer would be put together this early. However, it's always possible that Disney decides to surprise everyone with an early trailer. Probably more likely than Thor: The Dark World is that Disney will choose to also promote Monsters University and/or The Lone Ranger.