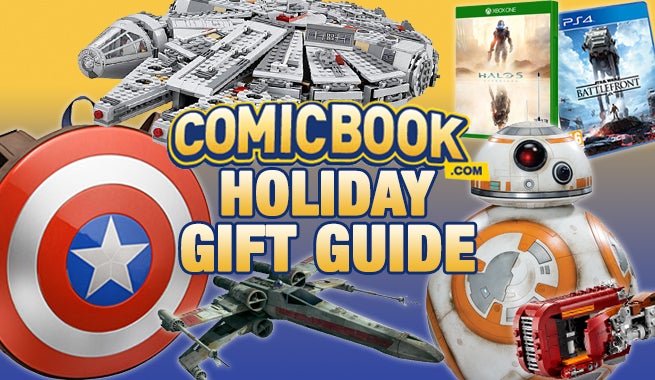 It's late into December and you still haven't gotten your holiday shopping done for your favorite geeks (or yourself)? If you haven't thought about tickets to a comic convention, you're welcome, but we've also got some alternatives that won't require traveling. And no, we're not going to suggest one of the (not really) hoverboards that like to start on fire.

Let's run through a few gift ideas that will leave those who made the Nice List happy.

This year, LEGO cranked out some great sets based on our favorite movie and comic properties, such as Avengers: Age of Ultron and Ant-Man, but above all, they unleashed a new line this winter for Star Wars: The Force Awakens.

The line includes a variation of products at different prices.

Looking for something on the smaller side? Check out Rey's Speeder. The set goes for under $20 and includes not only a Rey minifigure (who is sure-to-be everyone's favorite character) and her Speeder seen in the trailers and first act of The Force Awakens.

Want to go a bit bigger and to the Dark Side? The First Order Transporter is your best bet. With a squadron of Stormtrooper minifigures led by Captain Phasma, the included Resistance Soldiers have a tough battle on their hands. At just shy of 800 pieaces, the $89.99 LEGO set will keep a Star Wars fan busy for hours, if not days.

Then, of course, there's my personal favorite set and one which will grab the heart of a long-time Star Wars fan and never let go: The Millenium Falcon. At $149.99, you get what you pay for. Packing over 1,300 pieces a six minifigures (Rey, Finn, Han Solo, Chewbacca, Tasu Leech and a Kanjiklub Gang Member), builders can recreate scenes straight from not only The Force Awakens but Episodes IV, V, and VI, as well.

Shopping for a gamer and not sure which to get? Let's break it down.

The 2015 holiday season has been huge for gamers on both XBox One and Playstation 4.

First, consider the age of your gamer. If you're shopping for a youngling, consider the Disney Infinity or LEGO Dimensions games. Both call for action packed adventures in non-violent manners, while hurling the player into a thought-provoking exploration of vibrant worlds while playing as almost any of their favorite characters from comics, TV shows, and movies.

For the older, more mature gamers, Star Wars: Battlefront is a safe-bet. Who isn't a Star Wars fan, right now? Battlefront tosses gamers into Jakku and several other worlds in the Star Wars galaxy with incredible graphics, controls, and details Star Wars fans will appreciate experiencing. Depending on how hardcore of a fan you're shopping for is, maybe you should consider the epic Darth Vader themed Playstation 4 bundle which includes a limited edition PS4 and a copy of Battlefront.

If you happen to have a non-Star Wars fan in the house, several shooter games have busted out in the past few weeks, including the popular Call of Duty: Black Ops III, the challenging Rainbow Six Siege, the Master Chief's continued saga in Halo 5, and the classic remastered Gears of War: Ultimate Edition.

Some non-shooter games have also made their way out this year and we've given them our seal of approval. Rise of the Tomb Raider is simply amazing in every story mode, though it lacks a multiplayer mode. Lara Croft sets out on another adventure following her reboot in 2013 and the graphics on this XBox One exclusive are out of this world, which paired with a great story and controls, makes for a legendary trip.

Of course, there's Fallout 4, which is just about the biggest game of the year. This one fits gamers who are willing to pour countless hours into developing their character and exploring the decimated remains of a highly detailed futuristic world.

They'll already have seen the biggest movie of the year in theaters by the time you're giving out gifts but that doesn't mean there aren't some great 2015 movies available on DVD and blu-ray.

On the top of my list is Mad Max: Fury Road. This one needs to be bought on blu-ray and watched on the biggest, most HD screen available with some top of the line speakers to match. So, go ahead and make a home theater bundle just for George Miller's epic revisiting to the wasteland.

This year also saw the release of two fun Marvel Studios films: Avengers: Age of Ultron and Ant-Man. You can't go wrong with either of these films for your local geek (as long as they don't already own them). The Phase 2 Box Set is packed with behind-the-scenes footage and previews of future films which is great for huge fans who have already seen the movies.

One movie you and your geeks need to watch if you haven't (and I believe you haven't because the box office return wasn't where it deserved to be) is Ex Machina. Oscar Isaac and Domhall Gleeson, who both star in Star Wars: The Force Awakens, knocked it out of the park with this sci-fi thriller from writer/director Alex Garland.

A few good comedies made their way to theaters this year. My favorites: The Wedding Ringer, Vacation, and Spy.

Shopping for a young one? Disney/Pixar's Inside Out was one of the most amazing movies this year for kids and adults alike.

Sure, most TV shows are available on Netflix and Hulu, but owning a physical copy is always more satisfying than just re-watching an episode. Often times, you can find a box set of certain shows which contains a fancy poster or collectible and you know geeks just love collectibles.

Let's start with the most watched show on TV: The Walking Dead. The show's fifth season is available on blu-ray/DVD and if you get it from Wal-Mart, you'll find it includes a limited edition King's Country Sheriff badge.

Now, let's get away from TV and movies for some of the more peculiar geek gifts.

So, you don't think she'll use an Apple Watch, he doesn't want a Fitbit, and they're already sporting some Beats headphones?

I bet you didn't think of a Virtual Reality Headset. It's the next best way to play games or watch movies besides actually being in them. Virtual reality is likely to become the next popular trend in movies and gaming, so get ahead of the curve, and provide your geek an experience they would only get at a comic or video game convention right in their home, whenever they want.

What about an awesome remote controlled X-Wing straight out of Star Wars? Yes, it really flies and it's under $60!

Final gadget recommendation: a drone. If you're willing to shell out the cash, a drones are a hot new item especially for aspiring filmmakers. Not only are they simply fun to fly around but they can also put your geek to work, inspiring them to get started on that screenplay they've been kicking around since college.

Shopping for a student? Send them back from their winter break in Marvelous style.

A Captain America backpack, which I've seen many times being sported at comic conventions, is the perfect salute to the person on your Nice List.

They're an Avenger now. Almost. 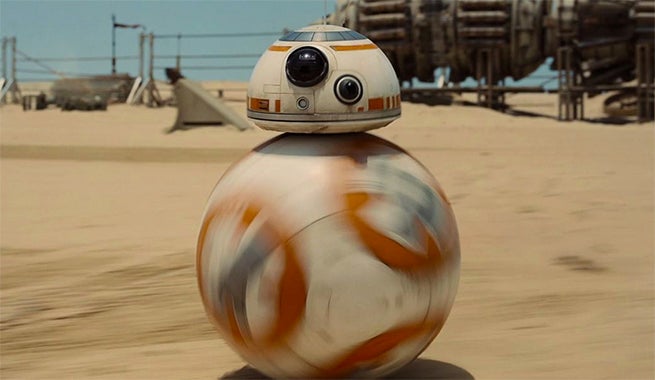 Talk about a perfect gift for a Star Wars fan.

The bluetooth powered app-enabled BB-8 is a blast. The cute new addition to the Star Wars franchise will roll around the living room and deliver holographic message all from the control of an iPhone or Android device.

It's also a fun way to mess with the pets in the house.