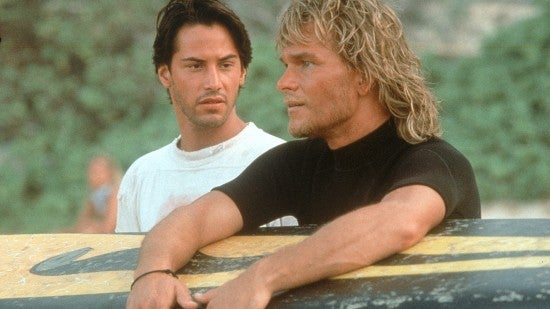 Gerard Butler will take on the role originated by the late Patrick Swayze in a remake of the '80s...err, classic?...Point Break, Deadline reports. Ericson Core, who served as a cinematographer for Lawrence Kasdan on Mumford before directing 2006's Mark Wahlberg vehicle Invincible, will direct the film from a screenplay by Salt and Total Recall writer Kurt Wimmer. Gerard Butler's character is described as "[a] Zen adrenaline-junkie bank robber," who faces off against Johnny Utah, a former college quarterback and FBI agent originally played by Keanu Reeves. Tank Girl star Lori Petty also starred. The original film was directed by Kathryn Bigelow, who has since become one of the most sought-after action directors in the instustry following twin hits with The Hurt Locker and Zero Dark Thirty.