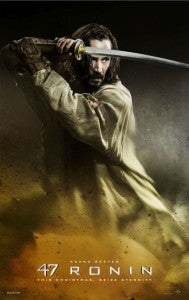 Keanu Reeves's next movie 47 Ronin, an American adaptation of Chushingura, has a new trailer meant for international audiences; it's been released online and can be seem embedded below. The film is a fictional account of the forty-seven ronin, a real-life group of samurai in 18th Century Japan who avenge the murder of their master. It has already been adapted to a half-dozen movies and a Japanese graphic novel. Check out the ad below. It's expected in theaters on Christmas Day, where it will compete with Chris Pine's Jack Ryan feature to be #1.