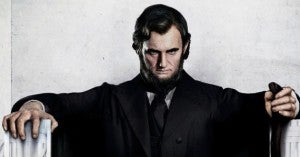 The first officially-released clip from the forthcoming Tim Burton-produced adaptation of Abraham Lincoln: Vampire Hunter has hit the Web and, courtesy Yahoo! Movies, you can see it below. The clip, clocking it at just over a minute, sees Lincoln and one of his allies defending a train from a horde of vampires, using mostly axes to decapitate the undead but sprinkling in a few surprises here and there, as well. The film, based on the novel by the same name from Pride and Prejudice and Zombies author Seth Grahame-Smith, stars Benjamin Walker and Rufus Sewell, and will be in theaters on June 22.

Abraham Lincoln Vampire Hunter on a Train in New Clip