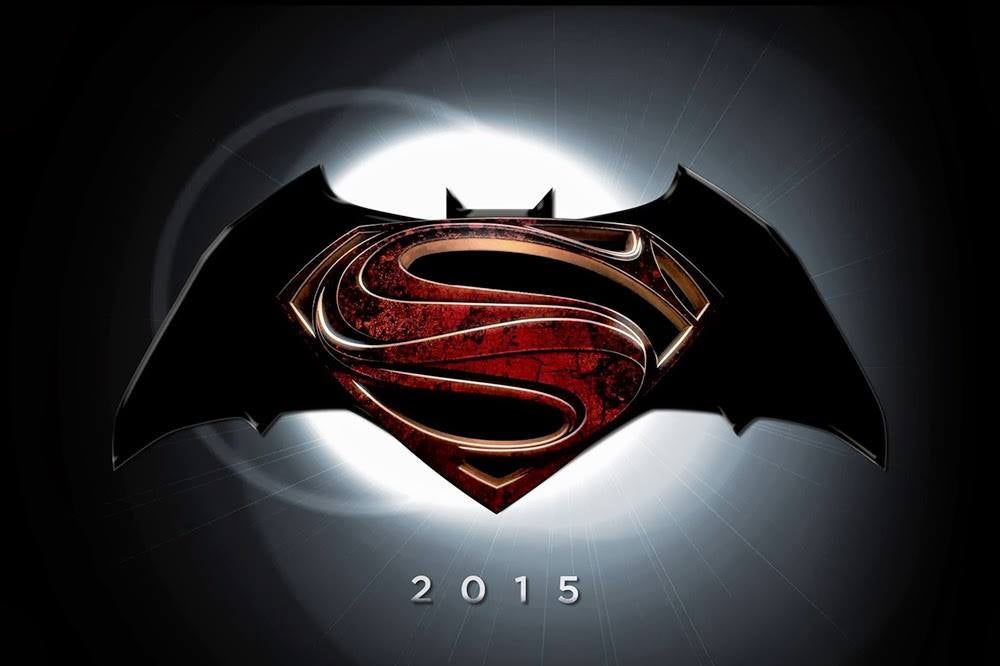 Everybody understands why it is that DC has elected to make Batman vs. Superman. Coming in 2015, the sequel to Man of Steel will put their two heaviest hitters in one movie together, creating a DC Cinematic Universe in an abrupt and definitive way that Marvel wasn't really able to do since so many of their top-tier characters (Spider-Man, the Fantastic Four, etc.) weren't in the hands of Marvel Studios when they started crafting an interconnected universe. And, yes, it's a sensible strategy. Warner Bros. hopes to move in the direction of a Justice League movie before the superhero movie bubble bursts--and everyone pretty much acknowledges that while there's a wealth of material to make great and high-grossing films for years to come, it's probably not sustainable to have DC and Marvel make three of the top five films at the box office every year. It may not be plausible, especially with Marvel starting to branch out to some lesser-known properties and the (admittedly remote) possibility of some major superhero flops on the horizon, to wait a bunch of years until Warners has had a chance to introduce the League through a series of clever cameos in Superman films or something. Needing results, they've put together a team-up film that's basically guaranteed to make a ton of money and will give them about 75% of everything they need to set up a Justice League film. And, yeah, it's awesome for fans, who will get to see these two titans of superhero comics on the big screen together for the first time. But what otherDC team-up movies can we, for the sake of this article, pretend were considered and abandoned along the way? What are some of the coolest, most obvious team-up flicks that have basically a zero chance at seeing the inside of your local cinema--but that, if they did, we'd pay to see them at least twice? Read on... 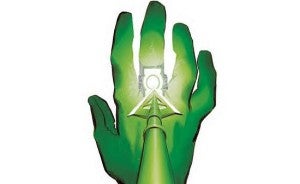 Green Lantern/Green Arrow The dynamic between Hal Jordan and Oliver Queen was an area that made for some rich (if heavy-handed) social commentary in the '70s, some great stories between then and now about a friendship that overcomes prejudices and obstacles, and provided some defining traits for Ollie at a time when he wasn't exactly one of the most popular characters in publication. Now, of course, Oliver Queen and Hal Jordan are both riding high in the comics. With Arrow a big success at The CW and Jeff Lemire having taken over the floundering Green Arrow title at DC, it's a good time to be a fan of Green Arrow. Green Lantern, meanwhile, has a strong creative team and the biggest presence he's ever had in the DC Universe, riding on the coattails of a history-making arc by DC Chief Creative Officer Geoff Johns, who has been sure to promote his replacements and help position the book for success so that it's not just another book that folded after he left it (I'm looking at you, Hawkman!). There's a similar dynamic here to what you'd get with Batman/Superman, as well; Green Lantern's power is nearly limitless, bullets bounce off of him and he brings with him crazy cosmic elements that could make for a truly deadly threat. Green Arrow is just a guy who's really awesome at what he does, with a cool bag of tricks and a will to win. The problem here, of course, is that the Ryan Reynolds Green Lantern movie didn't live up to expectations--and then, with poor word-of-mouth and a modest box office, they announced a sequel, creating a mountain of "why would they ever do that?" stories...and then forgot all about it. That made it feel like an even bigger flop than it really was, because not only did the studio not make a sequel to a big, expensive movie in this age of sequels and remakes, but they failed to do so after promising one to the fans. With the stink of that failure and the high budget required to make Green Lantern work, don't expect to see the character again until after the Justice League movie...and if both previous casting attempts (for Justice League: Mortal) and recent rumors are any indicator, that won't even be Hal Jordan. 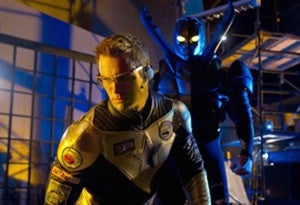 Blue Beetle & Booster Gold The Blue and the Gold, together on the big screen! It would be...well, it would be about the most indulgent thing DC could possibly do for fans, taking two characters with a very low public profile and teaming them up in what would presumably have to be a big-budget movie. Also, they'd probably have to backpedal on Jaime Reyes--one of their more successful examples of integrating a non-white character into the world of DC Entertainment--in order to truly please the fans who, let's face it, would be some of the only ones to show unless the promotion for this movie was absolutely stellar. The concept would work best with Ted Kord, Booster's longtime comic foil. The pair of them are, again, a bit of an odd couple as far as powers go. After years of being a punchline in the Giffen-DeMatteis series and afterwards, many writers treat Booster as though he's basically just a guy in a suit, but that suit is like Iron Man's costume, if it were designed in 2450 and wasn't so clunky. It gives him super-strength, energy projection, a force field and more--effectively making him one of the more powerful heroes who would have appeared on the big screen and absolutely the most powerful with no name recognition (Thor currently holds the title for powers-to-awareness ratio, but there were some people in the mainstream who remembered him when the movie came out). What does Beetle bring to it? Well, the best way to boil him down for a movie might be to make him a bit like Kato. He's your tech guy, who can also kick ass in a fight if you're not there or badly outnumbered. But having a "tech guy" around for a hero whose powers are technology-based? That's a must. 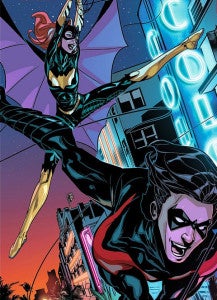 Nightwing and Batgirl One of the only things that many non-comics-readers can tell you about Batgirl is that she had unrequited sexual chemistry with Robin in both the 1960s TV series and then again in the godawful Joel Schmacher films. At face value, that's enough of a reason to keep Dick Grayson and Barbara Gordon as far away from one another as humanly possible. Then again, maybe the better strategy would be to reclaim the great dynamic they have in the comics from the pop culture scrapheap rather than rolling over and let previous failures define them. Batman's son and Jim Gordon's daughter. Given the bond built up between Batman and Gordon in the Christopher Nolan films--a version of the mythology that will stick with people for years--there's some powerful symbolism to be had there--and tying into the "older, wiser" Batman of the Batman vs. Superman movie, we could make an early-'20s version of Nightwing fly, since presumably the Caped Crusader would have had time to raise the boy off-camera. The problem? Well, if you're going to make a Bat-family movie, at least until the DC Cinematic Universe is more established, it's going to have Bruce in it--a  lot. And if that's the case, this just becomes the Batman & Kids movie. And nobody wants to see that. 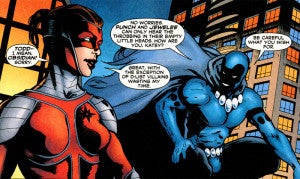 Manhunter and Obsidian Okay, so most of the others have been pretty obvious and this one might make you say, "Wha-huh?!" But it's solid. Marc Andreyko's version of Manhunter (Kate Spencer, the crusading district attorney) is one of the strongest new characters DC has introduced in years. And as a kick-ass female superhero with a solid power set, a cool costume that could translate pretty directly and easily to the screen and a diverse supporting cast of cool characters, she's kind of perfectly set up for a TV or movie treatment. Why Obsidian? Well, he's part of that diverse supporting cast--an openly gay superhero character whose powers and appearance invite no ridicule and whose persona is not defined by his sexuality. He's also the son of a Justice Society member and, while it's unlikely DC would want to tackle such a thing directly in the movies, you could hint at his daddy issues without coming right out to explain...kind of like what Marvel is going to have to do in Avengers: Age of Ultron since Scarlet Witch and Quicksilver can't say the word "Magneto." Or the word "mutant." And in the hands of the right writer, these characters could bounce off one another really well. They're peers in a true sense, in that they both have long and complicated histories with the superhero community that it's sometimes easier to just shut themselves out to, they've both got almost no awareness in the mainstream consciousness which means that there would be nothing in the way of serious accusations of tokenism for bringing in a female superhero with a gay male partner, and they've both got kind of mid-level powers that are cool to watch in action but that would still lend themselves nicely to being challenged by a threat that wouldn't necessarily bring Superman running. 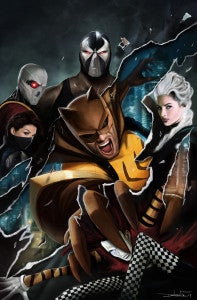 Secret Six Okay, so this is kind of cheating. Up until now, we've limited ourselves to just duos. But there are so many great permutations in Gail Simone's take on Secret Six that we couldn't pick just one pair that we'd like to see onscreen together. Bane and Ragdoll could be priceless; Bane and Deadshot could be dark and brilliant; the uneasy chemistry of Scandal and Catman? Compelling and discomforting in just the right way (those two could be a David Lynch film). There's something very translatable, relatable and cinematic about this comic, and any two of the characters could make for a fun story but you need all six to really bring it out. That's why people loved them so much here, and why before and after, nobody's ever really managed to make most of them as great. Why wouldn't it work? Well, it would probably be too dark, too violent or too off-putting to make a straight hero movie out of, and antiheroes aren't really DC's thing. Making a Superman who's a little more morally gray, after all, more or less negates the possibility of really capitalizing on some of the most effective parts of "anti-hero" storytelling. It would also be a group of characters of whom only one--Bane--is relaly known outside of comics (okay, maybe Deadshot because of Arrow). It would be a little bit like making Guardians of the Galaxy, but with the added baggage of fans going, "Hey, isn't that the guy who had the funny Tom Hardy voice?"