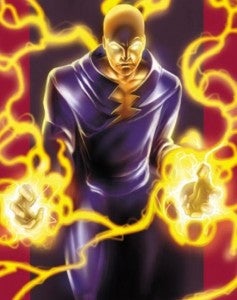 Ever since it was revealed that Jamie Foxx would be playing Electro in Amazing Spider-Man 2, fans have been wondering what his costume would look like. In the comic books, the original Earth 616 Electro has a bright green and yellow costume, which would probably look pretty garish on the big screen. Most have been speculating that either the original Electro costume would be toned down or Sony would opt to go with a look similar to the Ultimate Universe Electro, who has more of a purple leather-type costume. Well, Jamie Foxx himself has provided the answer in an interview with BlackFilm.com, while promoting Django Unchained. Fox said, "It won't be green and yellow. It will be a different color. They (the producers) want something for the future. They want to have it more grounded and not as comic bookie, so it won't be green and yellow. They want to try new things, like a liquid rubber and things like that, and there are all these bolts and stuff in my arms when they are hanging me upside down and trying to figure out what happen. How did he become this way? So, it will be some new stuff." Fox also added that the villain was being written very well and that Andrew Garfield and Marc Webb had both praised how great the script was. The Amazing Spider-Man 2 is scheduled to be released in theaters in the United States on May 2, 2014.