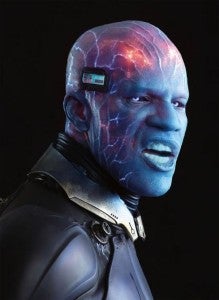 Be warned mothers! If you forget your kid's birthday, then they just might turn into a supervillain. In a new interview with Digital Spy, Jamie Foxx gives some background on just what leads his character Max Dillon to become the supervillain Electro. It turns out that Max Dillon has a really bad day. "The way we crafted Electro is that when he's Max you definitely feel for him," said Foxx. "Because he's just sort of been shut out. No one really cares about him, and it's his birthday. And even his mom forgets his birthday." However, the birthday snub by his own mother appears to be just one contributing factor. Foxx also hints at some type of dispute between Max Dillon and Spider-Man. "When he feels like Spider-Man betrays him, he really wants to hurt him bad," said Foxx. The Amazing Spider-Man 2 is set to be released in movie theaters in the United States on May 2, 2014. Check out the full Jamie Foxx interview in the video below.