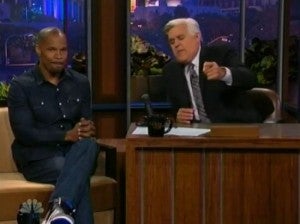 During an appearance on Tuesday night's Tonight Show to promote Whitehouse Down, Jamie Foxx spoke briefly about his role in Amazing Spider-Man 2. Jay Leno showed a photo of Jamie Foxx on the Amazing Spider-Man set with a funky hairstyle and wearing crooked glasses. Foxx explained, "So I play Max Dillon, and this is me before I turn into the villain. My sister is my hairstylist, and she created the…she does a great job…she created the Django look, Ray Charles and things like that. So I told her when I'm the nerd guy I want to be the first black man with a comb over. I told her make me look like I would look if I never made it." Then, Jay Leno showed a picture of Jamie Foxx after he turned into the villain. Leno asked, "Now, are you in whiteface there? What's going on?" Jamie Fox said, "No, it's actually blue. It's blue-face." Leno asked, "Now, do you stick you head in an airport toiler? How does that work? How do you get the blueface?" Jamie Foxx explained, "No, Howard Berger, one of the greatest makeup people, it's like a blue cast, but they are going to run like electricity through it, because my character's name is Electro." Foxx added, "What's funny though is doing the voice. And the voice is like [in a low growl], 'Yes, a world without mercy, a world without power.' But what's funny is when I forget my line and I have to go back to my regular voice." Check out the clip below to actually hear Jamie Foxx do his Electro voice.