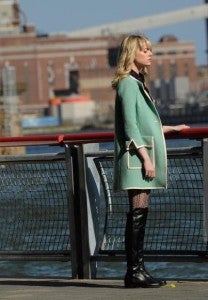 Warning: Potentially major spoilers ahead for The Amazing Spider-Man 2.

In a surprisingly candid comment, it appears as though Emma Stone, who plays Gwen Stacy in the upcoming Marc Webb-directed sequel The Amazing Spider-Man 2, has confirmed long-standing rumors regarding her character's story arc in the upcoming film. Talking with SFX Magazine, the actress seems to take the rumors as gospel, not really giving much thought to whether or not they're true and rather working from the assumption that they are and then going on to describe how, as an actor, she approaches that aspect of the material. "Essentially the argument is that Spider-Man kills her by accident, so the person she loves is the person who kills her, which is the most horrifying thing," Stone reportedly told the magazine. "Apparently people unsubscribed to the comic book when that happened because they were just so flipped-out over it. But, of course, I want to stay true to that." These remarks not only confirm a lot of fans' suspicions that the filmmakers would be embracing "The Night Gwen Stacy Died," but may also change the narrative around the film a little. That Gwen Stacy dies in the film has long been assumed, but one has to wonder whether speculation that it would happen in the third act of the film might be a bit off-base. If Stone (not an interview novice even by big Hollywood movie standards) is saying these things while the film is still in production, could fans expect a version of the story where Gwen dies early enough in the movie that this isn't a major spoiler in terms of the larger plot?