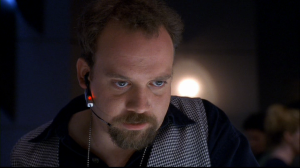 Paul Giamatti, the actor who plays Aleksei Sytsevich/The Rhino in Marc Webb's The Amazing Spider-Man 2, is reportedly reporting for duty in the third film as well, according to a new interview with Collider. The film, which is expected to feature the Sinister Six, may be his last in the franchise, though; even though at least a fourth movie is currently on the schedule for 2018, Giamatti only believes he's signed on for two movies--"the next movie, not the next, next movie," he joked. During an interview in support of his new film Parkland, in which he stars alongside Smallville star Tom Welling, the actor admitted to being taken aback by the level of fan enthusiasm. "I was stunned at the level of interest; I was completely surprised," Giamatti admitted. "I've never had the paparazzi guys running around on a set I was on. I was like, 'Seriously? What the hell are you guys doing?'" He said that the studio has been reluctant to give him any specifics regarding the Sinister Six possibility, but acknowledged that the story seems to be "going that way." Check out the full interview below.