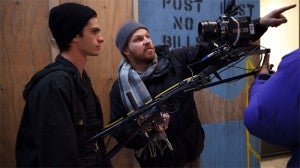 In a wide-ranging interview at The Huffington Post, The Amazing Spider-Man director Marc Webb, before jumping back behind the camera for a second installment in the hit franchise, took some time out to discuss casting the sequel, his opinions on rumored villain Jamie Foxx and the direction of the Star Wars franchise following last month's acquisition of Lucasfilm by the Walt Disney Company. "I come up with a list -- people that I'm a fan of," the director told HuffPo of the casting process. "And then we have a conversation and I like hearing ideas from different people. It just happens any number of ways: sometimes you audition, sometimes you find people that have a certain status that appealed to you for a variety of reasons. To me, what's really, really important is that I have to have a cast that are real actors. Do you know what I mean? They aren't just celebrities, but have real chops. I want to create a film that has really fantastic, quality, unique, deep performances. And that requires a specific kind of casting. And those are the people that I look to." Of Foxx in specific, the director didn't say anything on the record, except to tell the reporter that he find the actor "electrifying." He also hinted that there's a possibility he could cast J.K. Simmons, who played J. Jonah Jameson in the Sam Raimi Spider-Man movies, in the same role if the character turns up in Webb's sequels. As far as the big news of the moment, Webb--who referenced Star Wars in his debut feature, (500) Days of Summer--told the Huffington Post that he's looking forward to future installments. "I'm actually pretty interested in how they'll invent that," said Webb. "But, what it is, it's an interesting cultural comment. Because I think people are interested in this universe and they are interested in these different versions of it. There are ways that you can re-inflect iconic characters and re-attribute them like they have done in comics and like they've done in movies. I mean, how many versions of Les Miserables are there? They are always doing different and interesting adaptations of preexisting material. And I find that it can be appealing, if it's done well."