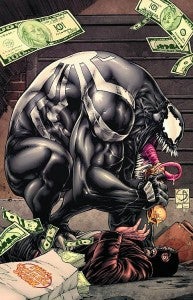 Back when they first announced that there would be a third and fourth Amazing Spider-Man film scheduled, ComicBook.com noted that director Marc Webb had already plotted out a trilogy before the first film was made, and that adding a fourth could fundamentally alter the structure of the story. It appears as though we were a bit hasty in that assessment, though, as Webb reportedly told Crave Online at San Diego Comic Con International that the fourth film might not be simply an extension of the existing story, but a spinoff featuring a new character altogether. "It might not just be a Spider-Man movie," Webb said. "You know, what was fun about the comics is that there's an entire sort of encyclopedia of characters, and stories, and histories, and nuances, and idiosyncrasies, and off-shoots." If it's a spinoff, though, who might it star? Well, producers Roberto Orci and Alex Kurtzman aren't averse to Venom. "We're fans of Venom," Orci told IGN when asked about the prospect of his film being the spinoff. "Venom is an amazing character. Venom is a brilliant character," Kurtzman continued, enthusiastically. "Part of what's interesting about Venom is that Venom can do all of the things that Spider-Man can't do, in a lot of ways. And I don't know, I guess that's why I respond to him." Last we all heard, Fantastic Four director Josh Trank was attached to a Venom film, on which he was reportedly working before The Amazing Spider-Man even came out. News of the Venom movie seems to have been shunted to the back burner with the Spider-Man sequels and Fantastic Four taking precedence for the studio and Trank, respectively, but nobody has yet ruled out the idea of Trank coming back to resume work on the film in the future. Recently, a fan-made film featuring Venom was released online. It homages the classic Belgian black comedy Man Bites Dog, but with a Spider-Man twist. Check it out (followed by the original IGN video) below.

Amazing Spider-Man Producers: Venom Spinoff Could Be Coming in 2018