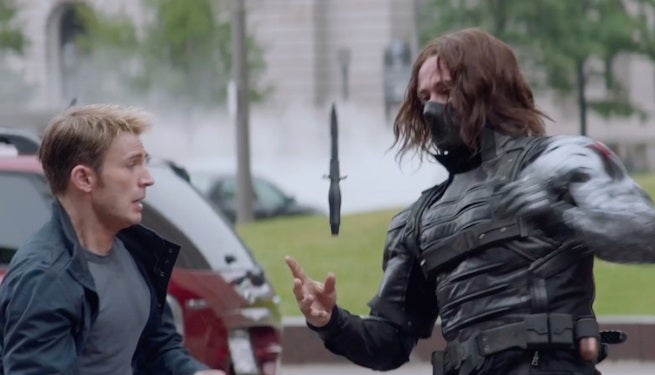 If you want a copy of Captain America: The Winter Soldier on Blu-ray or DVD, you'll have to get it somewhere besides Amazon -- at least for now.

The retail giant are engaged in a dispute with Disney over presale prices and practices, and in order to strengthen their position, Amazon has halted orders on some of Disney's biggest movies of 2014. Captain America: The Winter Soldier, Maleficent, Muppets Most Wanted and Million Dollar Arm are no longer available for preorder on physical media.

Captain America and Maleficent can be pre-ordered for Amazon Instant Video, while the other films are simply no longer available for pre-order (they will likely be added to Instant Video as their release date draws closer, provided the disagreement is not settled by then).

Amazon, who now own digital comics giant comiXology, got into a similar conflict with Warner Bros. earlier this year regarding pre-orders on The LEGO Movie. Ultimately the conflict was resolved, with no details of the agreement disclosed publicly.

A number of other online retailers already have preorders available for the films. Wal-Mart stores have been carrying physical pre-order cards for Captain America and Maleficent -- which include a Blu-ray and DVD when they're released as well as an early digital copy of the movie on Vudu and sometimes exclusive features -- since the films were in theaters.

Amazon, of course, remains embroiled in a months-long battle with Hachette (and some other, smaller publishers) over pricing that has resulted in Amazon trying to make it similarly difficult to order the physical books on their site. Hundreds of authors signed a letter this week printed as a two-page ad in the New York Times urging change.

Amazon Halts Orders of Captain America: The Winter Soldier, Maleficent and More in Dispute With Disney