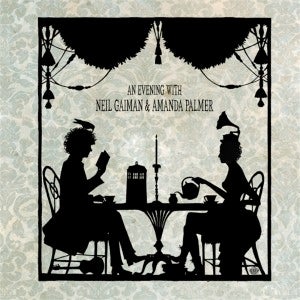 Musician Amanda Palmer announced earlier today that a recording of herself and her husband--comics legend Neil Gaiman--doing on-stage readings, comedy and music will become available to the public for the first time on November 19, titled An Evening With Neil Gaiman & Amanda Palmer. Originally crowdfunded and available exclusively to Kickstarter backers until now, Palmer explains that "we raised 666% of the funding goal, hired two awesome engineers to come on the road with us, and put together a beautiful 3-disc set of music & readings with art by Cynthia Von Buhler, which was then mailed to 3,873 very happy (we hope) Kickstarter backers." There was some downtime, though, both by design (to let the backers have something exclusive) and because "we've been waiting for the right time to release the album to the general public and its NOW. we re-packaged the 3-disc set with a different take on the artwork (it's a little less FANCY than the Kickstarter edition, which was balls-out stunning and came with heavy-duty art inserts...but it's still beautiful)." You can order the performance at Palmer's website, in a variety of different packages that start at $10 for a digital-only bundle and run all the way up to $140 for a "deluxe bundle" consisting of two coffee mugs, a t-shirt, a poster, a journal, a teapot, a tea towel and the digital bundle. All of the non-digital items come emblazoned with the image at right. The performance is also available on vinyl record. Orders placed on the website by November 1st are expected to receive their product (with the possible exception of the teapots) by the release date of November 19.