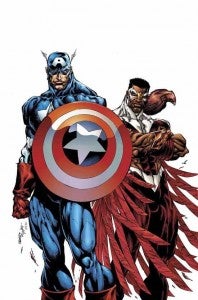 The Captain Americasequel just got a whole lot more interesting. In our recent "Captain America The Winter Soldier Five Things We Know" article, we had mentioned the rumors that Captain America could be getting a sidekick, and it's definitely looking like those rumors are coming true. According to The Hollywood Reporter, Anthony Mackie is in negotiations to play the Falcon. The Hollywood Reporter notes that Marvel wouldn't comment, but that's pretty much their standard policy. Anthony Mackie is best known for his role as Sergeant JT Sanborn in The Hurt Locker. He also appeared in Abraham Lincoln: Vampire Hunter and is involved in several other upcoming movies. Landing Mackie for the Falcon role would be a huge win for Marvel Studios. It's unknown at this point exactly what the plotline for the Captain America sequel will be, but the selection of The Winter Soldier as the subtitle has many speculating that it will be based on the Ed Brubaker comic book storyline of the same name. If that is the case, then Captain America's former sidekick Bucky Barnes will also be returning, except he won't exactly be coming back as an ally of Captain America. Captain America The Winter Solider is scheduled to be release in theaters on May 4, 2014.