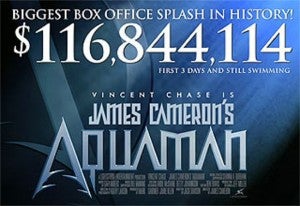 Could Warner Bros. really be planning an Aquaman movie? The closest comic book fans have come to an Aquaman movie in the past is the fake James Cameron-directed Aquaman movie that was a running joke on the HBO show Entourage. However, recent reports have surfaced that a real Aquaman movie might be in the planning stages, no joke. The Wrap, which is a well known entertainment news site with lots of inside sources, reported a couple days ago that Warner Bros. was kicking the tires on possible making Wonder Woman and Aquaman movies. Of course, the rumor of a possible Wonder Woman movie has been out there for awhile, but news of Warner Bros. seriously considering an Aquaman movie was surprising. For the most part, Aquaman is still often considered somewhat of a running punch line, who gets little respect among the general public. When playing the new Injustice: Gods Among Us video game, Conan O'Brien joked, "Even fish are embarrassed when they see Aquaman." Even Man Of Steel actor Michael Shannon has been poking a little fun of Aquaman recently. When asked in an interview what superhero he would like to see Zod fight next, Shannon selected Aquaman. Then, he joked, "Ultimately it would be Zod versus like a bunch of sea creatures that Aquaman talked to, while Aquaman's hiding in the corner." Despite Michael Shannon's joke, there has been some buzz over possible Aquaman Easter Eggs in Man Of Steel. When General Swanwick give a password over the phone, he says something along the lines of "the password of the day is Trident." Of course, Aquaman is known for carrying a trident. Even though Aquaman has struggled over the years to even maintain his own ongoing comic book series, he has been pretty much a badass in the relaunched New 52 universe from DC Comics. As odd as it may sound, a lot of fans would likely rally around an Aquaman movie, as it could be really awesome done correctly. However, would Warner Bros. really do an Aquaman movie before Wonder Woman or even Flash?