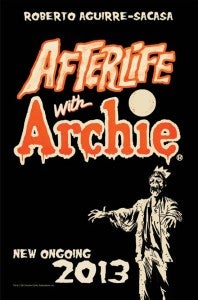 We just can't get the image of a Hollywood huckster pitching "It's Archie meets The Walking Dead" to movie studio executives. According to Deadline though that appears to be exactly what has happened, as they are reporting that Warner Bros. just signed a deal to develop a new live action movie based on the characters from Archie Comics. The movie will of course feature Archie, Betty, Veronica, and Jughead, but where the report takes an unusual turn is that zombies will also be invited to the party. The movie is going to reportedly be produced by Roy Lee and Dan Lin with  Jon Goldwater, Krishnan Menon, and Jon Silk as executive producers. Jason Moore of Pitch Perfect fame will be directing with Roberto Aguirre-Sacasa of Glee writing the script. According to Deadline's sources, the script will be a high school comedy, but they also point out that it will likely include a dash of horror. Aguirre-Sacasa recently signed on to do a new line of Archie Comics called Afterlife with Archie, which include flesh eating zombies.