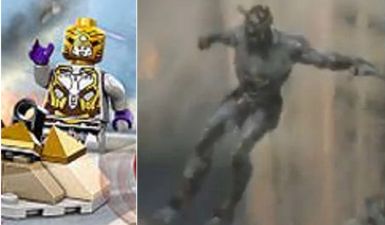 Isn't it kind of odd that the aliens that appear in the Avenger movie trailers so far don't look much like the toy designs that have shown Loki's army? Does anyone find it unusual that Director Joss Whedon and Marvel Studios President of Production Kevin Feige have both said the alien race in The Avengers exists in the comic books, but no one has been able to conclusively identify the aliens through the numerous screen captures from the trailers. Even with a recently revealed close-up facial shot of one of the aliens, no one has been able to conclusively identify who the aliens are. Whedon and Feige have both expressed their desire to keep the identity of the alien race in The Avenger a secret. But how do they tease a major element of the film to the general public, while preventing obsessive comic book fans from spoiling the surprise. Here's a thought. The look of Loki's army is actually a creation of CGI. How difficult would it be for Joss Whedon to create a different look for the aliens to include in the brief scenes in the trailers? That way he could sell the movie to the public by highlighting the fact that aliens are attacking but also keep secret the real identity of Loki's army. Wouldn't it be the ultimate surprise if the aliens have a completely different look when they actually appear in the movie? So what do you think? Is it possible that Whedon might do something like fake trailers to pull the wool over the eyes of fanboys? It's not completely unprecedented as Black Widow's S.H.I.E.L.D. patch was removed from early Iron Man 2 photos so as to keep secret what side she was on.

Are The Avengers Trailers Being Faked?