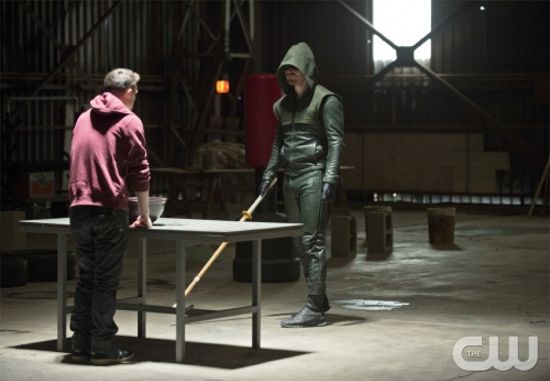 Green Arrow and Roy Harper face off against Bronze Tiger in an extended preview of Arrow's next episode, "Tremors," due out next Wednesday. Oliver and Thea's long-absent stepfather Walter Steele also returns in the episode, kicking off what's expected to be a few weeks of family drama with both the Queen and Lance families seemingly ready to make the move into A-plot territory while Brother Blood and Deathstroke, still opreating in secret, won't make any of what goes on for them easier. Check out the second, extended look at the episode (which runs about ten seconds longer than last night's promo reel) embedded below, along with the official description of the episode. ARROW TRAINS ROY — Arrow (Stephen Amell) offers to train Roy (Colton Haynes) so he can learn to control his newfound super-strength. However, Roy is a rebellious student and refuses to listen unless Arrow reveals his true identity, which Oliver refuses to do. Meanwhile, the Bronze Tiger (guest star Michael Jai White) escapes from prison and steals Malcolm's earthquake machine to sell to the highest bidder. Oliver, Diggle (David Ramsey) and Felicity (Emily Bett Rickards) attempt to stop the transfer, but Roy gets in the way, putting everyone in danger. Laurel (Katie Cassidy) is disbarred and spirals out of control. Moira (Susanna Thompson) is thrilled when Walter (guest star Colin Salmon) asks her to dinner, but his reason surprises her. Thea (Willa Holland) encourages her mother to ask Walter to reconcile. Guy Bee directed the episode written by Marc Guggenheim & Drew Z. Greenberg.