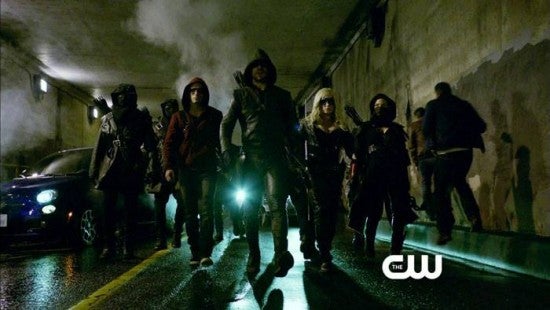 In spite of being an episode that showrunners said more or less wrapped up the first two seasons of the show, last week's episode of Arrow left a lot of threads dangling, presumably laying the groundwork for the events of the third season. In a trio of very brief interviews at TVLine, members of the cast have some thoughts on just where their characters might be next season. Arguably the most obvious is Malcolm Merlyn's relationship with Thea Queen, which took a surprising turn in the Season Two finale when she made off with him in the back of a limo. "He's got to train her to be a powerhouse, to be a tough bitch," John Barrowman, who plays Season One villain Merlyn, said. "She's tough now, but she's got to be tougher." He also apparently has requested that, now that he's been promoted to series regular and we'll presumably be seeing him in costume more often, his character can eschew the stifling and "claustrophobic" League of Assassins uniform. "I've already said to [exec producer] Andrew Kreisberg, 'I want an ouftit like Stephen [Amell]'s, but in black,'" Barrowman added. That ultimately shouldn't be a problem story-wise, considering that he's not only severed ties with the League, but the primary reason for sticking him in that full-body costume to start with was likely connected to the twin mysteries they were cultivating during the first season as to the identities of the Dark Archer and the character then known only as the well-dressed man, who turned out to be Merlyn. Actress Katie Cassidy, who plays Laurel Lance on the series, seemingly believes that the handing off of Black Canary's jacket at the end of the second season finale, and has started a workout regimen just in case. "I do think the torch has been passed," she said. "I get that feeling, and I think everybody else gets that feeling." Earlier in the season, series star Stephen Amell said that the third season would be "more intimate." That might explain why, according to Amell now, the big-bad who drives most of next season won't be as "omnipresent" as Deathstroke was this year. "I don't think that will necessarily be the case in Season Three," Amell said. "It's going to be a little bit different than in Season Two."