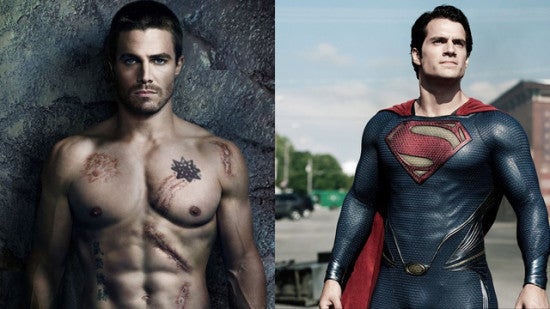 While there's been no official announcement if movies like Batman Vs. Superman in the DC Cinematic Universe will connect with TV shows like Arrow, Arrow star Stephen Amell continues to think it's a possibility. In a new interview with Fandango, Amell drops a couple revealing comments. "All we have to do for something like that to happen, or even be a possibility, is continue to take care of business with our show and then we put ourselves in a position – but the important thing is our show," said Amell. "I have had discussions, but I think the gestation process for this project is a lot slower than most people think. I mean, they haven't even shot the next one. They haven't even shot a frame of the movie before the movie everyone thinks is the Justice League movie!" Fandango also noted that the talks were definitely at the studio level, so Amell wasn't just having discussions with random people. It is interesting that Amell points out the gestation process for Justice League might be longer than people think, which is probably backed up by the recent delay in Batman Vs. Superman. Batman Vs. Superman is now scheduled to be released in movie theaters on May 6, 2016. Update: Stephen Amell has denied the report by Fandango that he's had discussions at the studio level about Justice League. Fandango has edited their original article, which was widely reported on a number of sites, to remove the part about the Justice League discussions.

Arrow's Stephen Amell Has Had Discussions About Justice League Movie

The Black Phone Director Teases There Have Been Conversations About Sequel