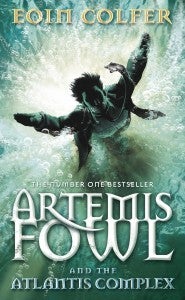 Harvey Weinstein, the co-founder of Miramax who split with Disney following a number of content-related conflicts, will team up with his old employers to produce Artemis Fowl, a feature film based on the best-selling young adult series of novels by Eoin Colfer. Artemis Fowl is about a 12-year-old Artemis who is a millionaire, a genius - and above all, a criminal mastermind. But Artemis doesn't know what he's taken on when he kidnaps a fairy (Captain Holly Short of the LEPrecon Unit) to harness her magic to save his family. These aren't the fairies of the bedtime stories  - they're dangerous. Besides Artemis Fowl, Colfer is best-known for writing ...And Another Thing, the sixth novel in the Hitchhiker's Guide to the Galaxy trilogy. Disney also holds the rights to that franchise, but after a disappointing 2005 film adaptation of the first novel, no future films were made or scheduled. Weinstein and his brother left Disney in 2005 after, in 2004, the company refused to distribute Fahrenheit 9/11, the Michael Moore-directed documentary that the Weinsteins had helped produce, citing a fear of controversy and boycotts. The film was eventually distributed by Lionsgate and IFC Films. Fahrenheit 9/11 did draw some fire from some on the right, particularly for coming out so close to the 2004 election, but most analysts see Disney's choice to distance themselves from the film as a financial mistake. It grossed more than $119 million and remains the top-grossing documentary film of all time; the closest competition, March of the Penguins, made just over $77 million and only three documentaries have ever generated more than $50 million at the U.S. box office (the third being a Justin Bieber movie). Lionsgate had similarly come to the Weinsteins' rescue five years earlier, when Disney refused to release Kevin Smith's Dogma, citing fear of offending Catholics. Ultimately there was a minor outcry from religious groups, but Smith's charm offensive--doing press for the film and pointing out that he himself was a Catholic and the film was a case of finding comedy in your own life--was mostly effective. "With its balance of mystery, adventure and family appeal, Artemis Fowl is a natural fit for Disney," said Sean Bailey, president, Walt Disney Studios Motion Picture Production. "We're looking forward to collaborating with Harvey on this exciting project." "Harvey is one of the preeminent producers in the industry, with impeccable taste and creative instincts," added Alan Horn, chairman, The Walt Disney Studios. "I had a wonderful time working with Harvey during my tenure at Warner Bros., and I'm very happy to continue that relationship here at Disney." "If you would have told me five years ago I would be producing a project with Disney I would have thought you were crazy," said Harvey Weinstein, Co-Chairman of The Weinstein Company. "I feel as though everything is coming full circle considering Bob DeNiro and Jane Rosenthal brought me this book while I was still at Miramax and within hours I told them I wanted the rights to the film. I am thrilled to be reunited with Alan Horn who I worked with while he was at Warner Bros. and we had tremendous success with The Aviator, Starsky and Hutch and Teenage Mutant Ninja Turtles. It is also exciting to partner with friends Alan Bergman, Sean Bailey and of course Bob Iger who has been incredibly generous to me over the years. This is a special project for me because my children absolutely love this book. This story is for everyone and there is no one better than Disney to make a film that will excite people young and old." Books similar to Artemis Fowl, such as A Series of Unfortunate Events and the Percy Jackson series, have had an uneven road in recent years, with many seeing them simply as "the poor man's Harry Potter" and not giving them a chance. Studios have also been known to self-sabotage book series, with films like Jack Reacher, Alex Cross and the aforementioned A Series of Unfortunate Events being approached tentatively and without directly adapting the source material, sometimes leading to a messy film that tries to do too much in order to be "definitive" and ultimately ends up turning off audiences and failing to build the franchise the studio hopes for. Since Artemis Fowl's first installment actually was just named after the character and did not have a subtitle, it should not necessarily be understood that this title is symptomatic of that habit. Disney, of course, doesn't tend to have those kinds problems with material they license and the recent willingness by Hollywood to take a chance on a second Percy Jackson film in spite of the underwhelming performance of the first, may signal hope for this franchise.