Alright, so everyone is pretty much aware by now that there's no chance Justin Bieber is actually going to play Robin in Batman vs. Superman, are we agreed? I mean, besides the fact that the purported script cover features the name of the comic book it's supposedly adapting (which would never happen), and which we've been told is not actually being adapted (like, multiple times now), there's the fact that the Robin in that comic is female. The most obvious choice is that Bieber's Funny or Die video will be about how he's cast as Robin and comes to the set excited right up until he figures out that Carrie Kelley is a girl. In any event, even if he were to be cast, he wouldn't have been the first piece of stunt casting to appear in a comic book movie. There have been plenty before--some of whom have turned out alright and some of whom...well, they're better left forgotten. So we're going to remind you! There's nothing inherently wrong with stunt casting. The process--which, if you're not familiar with the term, refers to casting big stars, often in small roles, more to get media or audience attention than anything else--has occasionally produced some memorable performances and especially in certain contexts (say, sitcoms) can be really effective. We'll just say here that Stan Lee's cameos don't count for the purposes of this list. Why? Well, mostly because he's done a thousand of them and it's basically impossible to judge which one is the most over-the-top. Additionally, we're not counting the many Marvel cameos that set up the next film, because it's a bit difference to bring in a big-name star if you're doing so to build up a franchise for the future. 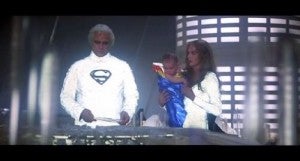 Marlon Brando in Superman: The Movie (and doubly so in Superman Returns) We'll just take this one directly from the Wikipedia entry for stunt casting as a concept: "Stunt casting is used to generate media attention. It may also be employed in order to garner studio support or financing for a project; for example, according to DVD featurette commentary, the 1978 version of Superman received studio support only after the producers were able to enlist A-list actors Marlon Brando and Gene Hackman to appear." So...there's that. There's also the fact that in 2005, after Brando had already passed away, director Bryan Singer dug up a bunch of cutting room floor footage of the actor and digitally inserted him into Superman Returns, crafting a "new" performance for the Academy Award-winning actor out of the stuff Richard Donner had decided not to use. 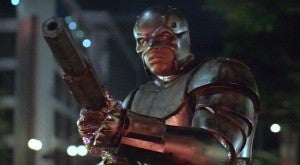 Shaquille O'Neal in Steel "Hey, he's got a Superman tattoo? Let's get him in our Steel movie! It's about a guy who hangs out with Superman!" As if that silly logic wasn't enough of a reason to name Shaq as one of the silliest cases of stunt casting in history, let's go with this: the removal of any reference to Superman from Steel's mythology meant that the connection--and the shot in the film of Shaq's Superman tattoo--made absolutely no sense whatsoever. And, alright, this one is tougher to count because "stunt casting" usually doesn't apply to the fim's lead--but in this case, I'm going to allow it since Shaq's celebrity is really the only reason to cast him in the film; it's not like his other performances had been critically-acclaimed or even particularly high-earning.

Kevin Smith in Daredevil Okay, so this one's a glorified cameo, but still: Kevin Smith, geek icon (especially back then, before he got so saturated that he started to make enemies) and author of one of the most respected Daredevil runs in the comics in the last 20 years, appears in Daredevil in a role that the movie literally could have happened without. It's like Stan Lee's cameo in The Amazing Spider-Man. Lady Gaga in Sin City: A Dame to Kill For This movie's not even out yet, so it's certainly impossible to comment on much of what's going on here, but the idea that Lady Gaga has been tapped to appear in the long-awaited (and now delayed again) Sin City sequel certainly counts. 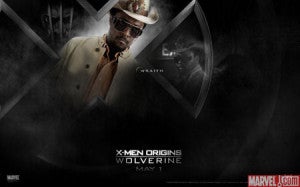 Will.i.am in X-Men Origins: Wolverine Wraith was never likely to become a major player in the X-Men Universe, even before X-Men Origins: Wolverine was widely panned and forgotten, which is what differentiates him from the common practice of casting big names in just about every role in the first installment of a superhero franchise to help build for the future (see also: Man of Steel), or casting big names as the film's villains (see also: all the Batman movies). He was also the only really big name to be brought in for a role that wasn't likely to spin off. Taylor Kitsch wasn't exactly a superstar, and while Ryan Reynolds has some name recognition, he's less obvious because a Deadpool movie was planned.

Campbell isn't quite as much of a draw outside of his small but passionate fan base as some of the actors mentioned above, but one thing's for sure: putting him in the Spider-Man films was an attention-grabbing move by his friend and frequent collaborator, director Sam Raimi. That he then went on to use the actor over and over again, in different roles each time, made it kind of like Stan Lee: "Spot the Campbell cameo!" could have been a fun game if the franchise had continued on rather than being rebooted. This one gets "honorable mention" since it's hardly stunt casting--more like the buddy-system casting that Kevin Smith is famous for in his own movies, and that might have played a role in him winding up in Daredevil.