When Marvel's Avengers: Age of Ultron trailer dropped, speculation started as to who Andy Serkis (above left) of The Hobbit, The Lord of the Rings, and general motion capture awesomeness fame would be playing and what it meant for the future of Marvel's cinematic universe, particularly as relates to the Black Panther. In fact, we did our own piece speculating on whether Serkis' appearance would be as the character Ulysses Klaw and whether that meant that a Black Panther film could be far behind.

Following this line of thought, we figured we'd take it to its next logical step and delve into this minor Marvel malefactor. Ulysses Klaw first appeared in issue 53 of Fantastic Four and his backstory is irrevocably tied in with that of T'Challa, otherwise known as the Black Panther. Hailing from the fictional African nation of Wakanda, T'Challa is the king of this isolationist, wealthy, and technologically advanced locale. How entwined are these two characters? Well, T'Challa inherited the kingship after Klaw killed his father T'Chaka. 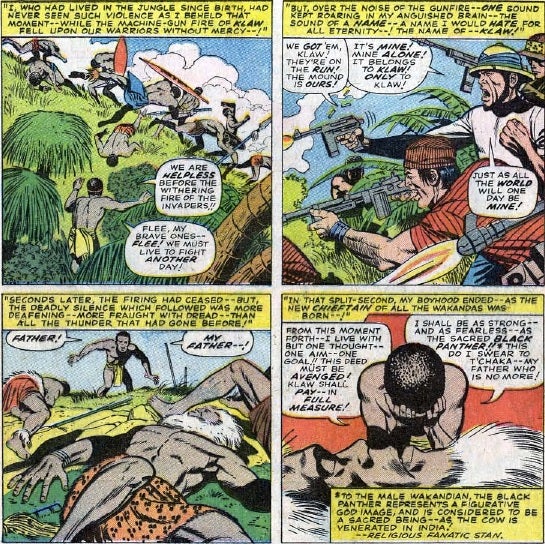 Why did Klaw kill his father? Vibranium. Yup, that magical mineral that makes up Captain America's mighty shield can only be found in Wakanda and Klaw wanted to get his hands on it. It was deposited in that country via meteorite many thousands of years ago and is both the source of Wakanda's wealth as well as a great deal of conflict. The fact that the Avengers: Age of Ultron trailer showed Cap's broken buffer is another reason why folks are speculating as to the coming appearances of Klaw and T'Challa because who do you see when you need to fix a vibranium shield other than the person who controls the world's supply of the stuff?

Getting back to Klaw, he wanted to vibranium for its unique sound-based properties which Klaw, the self-named Master of Sound felt that he could exploit for money and power. Following the murder of T'Chaka though, his plans were first foiled by T'Challa who had gotten his hands on Klaw's own sound blaster and used it on Klaw and his men, particularly destroying the villain's right hand. 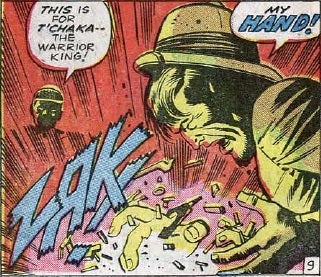 It wasn't long though before Klaw was back and menacing the Wakandan people though, sending creatures composed of solid sound (just go with it) to attack them. Once again though, T'Challa defeated Klaw, now outfitted with a sound powered and/or activated glove. While we have a good look at Klaw here, take a moment to note his appearance. With that scraggily hair and take particular form of beard, he's almost a dead ringer for Andy Serkis in the image shown in the trailer, the apparently khaki shirt supporting the "Great White Hunter" image that Klaw sported in his initial appearance. 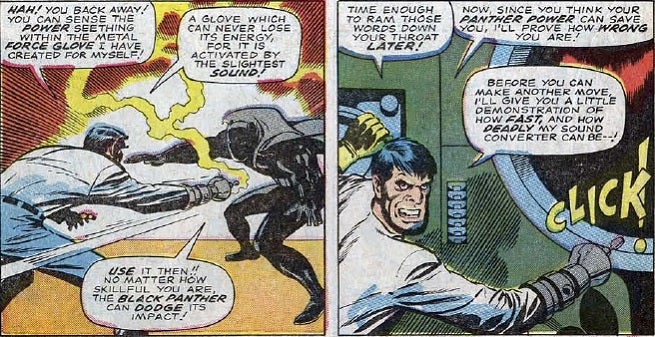 Following this defeat, Klaw jumped into the sound transformer that had been creating his sound-based creatures and found himself transformed into a being made of living sound, still sporting his "force glove." Being composed of solid sound, Klaw in his altered state has superhuman strength and durability. Additionally, his prosthetic glove, improved upon following Klaw's makeover, is now capable of such feats as projecting high-volume sonic waves, creating blasts of concussive force, and creating solid sound-based constructs. In the comics, it has been demonstrated that Klaw's body is in fact amazingly resilient in that it can be separated into many pieces without actually killing him and can be fused back together simply by bringing the bits back together. Additionally, he no longer requires food, rest, or oxygen. 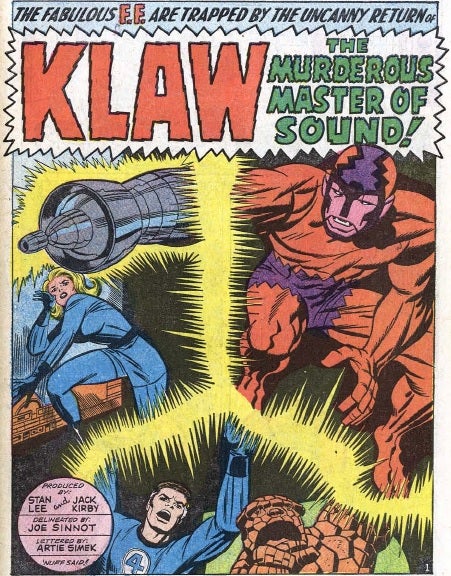 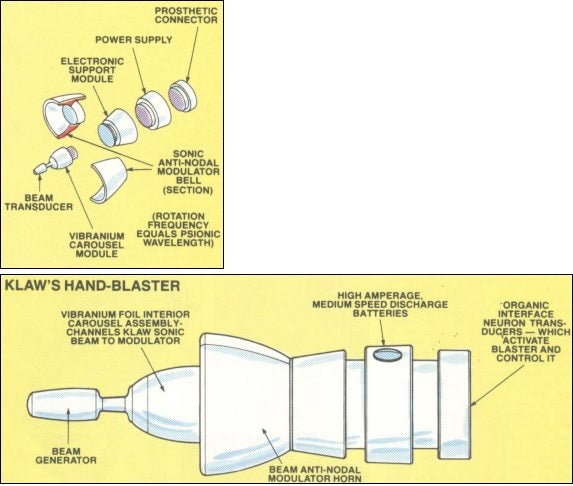 It should probably be noted that Klaw's origin and background have been significantly expanded upon since his initial appearance. However, the essential elements remain consistent and his enmity with the Black Panther is one of his defining characteristics. Beyond this, he seems to have few defining characteristics or long-term plans beyond the acquisition of power and influence.

It should also be noted that while Klaw and his prosthetic weapon (pictured from the Official Handbook of the Marvel Universe #15) constitute a formidable adversary, he does have a fairly glaring weak spot. In an ironic twist, the very element that he once sought now generally serves as his undoing. 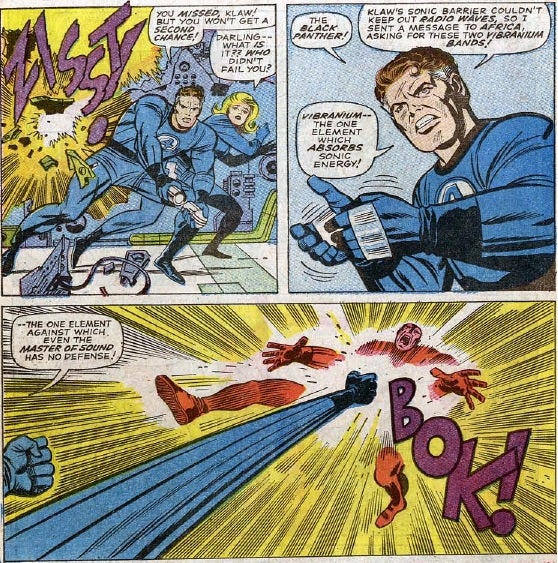 Vibranium and its unique vibration and kinetic energy-absorbing properties make it a potent foil for Klaw's sound-based form. Often something as simple as a set of vibranium knuckle-dusters is sufficient to make quick work of the "Master of Sound."

So, is Andy Serkis playing Klaw and does this mean that we can all start looking forward to a Black Panther movie? Only time will tell but we can certainly hope!

Avengers: Age of Ultron - Who Is Ulysses Klaw?