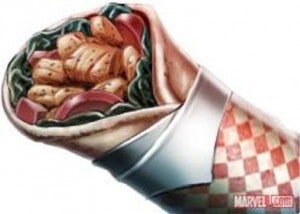 It's amazing that with all the product tie-ins related to The Avengers that the product that is benefiting the most appears to be an unofficial tie-in. In the Avengers movie, Iron Man asked Captain America, "Have you ever tried Shawarma? There's a Shawarma joint about two blocks from here. I don't know what it is, but I want to try it." With all the classic lines in the Avengers, this line might have been quickly forgotten if not for some last minute filming by the Avengers cast. After the Avengers world premiere, the cast got together and filmed one last scene, which showed all the Avengers sitting around a table eating Shawarma. The scene was tacked on after the credits, providing one last memorable laugh in The Avengers for audience members that stuck around to the very end. Since The Avengers became a huge blockbuster movie, there have been reports all across the country that Shawarma sales have been rising. Now, Marvel Comics has announced that they are even incorporating a digital version of Shawarma into their Marvel: Avengers Alliance Facebook game. The announcement actually revealed that there will soon be two new items added to the game: a new weapon based on the one that Agent Coulson shoots Loki with and the aforementioned Shawarma. The digital Shawarma is described as a favorite snack of Earth's Mightiest Heroes, which restores both health and stamina to one ally.