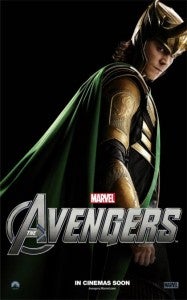 Just a couple days ago, Comicbook.com reported that Marvel would be rolling out a super promotional push to support the Avengers movie. We also said to expect an announcement about a Super Bowl ad spot to come very soon. Well, Marvel has just made it official and announced a 30 second Super Bowl spot that will air during Super Bowl XLVI on February 5 on NBC. Many had been wondering why Marvel had remained relatively silent recently on The Avengers, while The Dark Knight Rises generated considerable buzz with multiple trailers and a prologue. Well, this is the answer, they were holding out to coordinate their promotional push with their expensive Super Bowl ad buy. To help build up anticipation for the Super Bowl commercial, Marvel Studios has also announced that they will be sponsoring a Global Twitter Chat on Tuesday, January 31, 2012 at 11 AM PST. The 30 minute live tweeting event will include Tom Hiddleston, Clark Gregg, and Joss Whedon. Hiddleston plays Loki and Gregg plays Agent Coulson in The Avengers, while Joss Whedon is the film's director. According to Marvel Studios, fans can participate in the Q&A on Twitter by using the @Avengers handle and the #Avengers hashtag. As a special treat, participating fans will be able to watch a 10-second tease of the 30-second Avengers Super Bowl spot. There will also be Avengers prize packs given away as part of an Avengers trivia challenge. Even international fans will be able to participate by submitting questions in their native language through a global translation tool provided by Ortsbo.com. The Avengers opens in theaters in the United States on May 4, 2012.