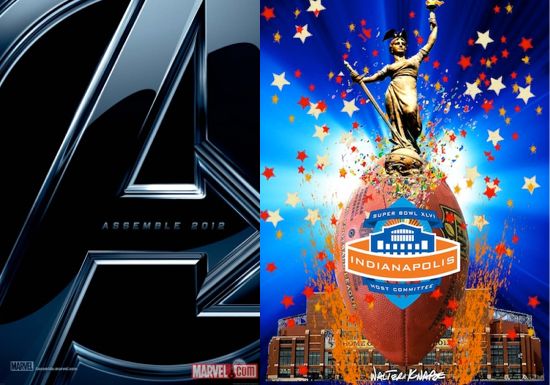 For millions of sports fans, Sunday is the day when the New England Patriots will face off against the New York Giants in Super Bowl XLVI. It's a rematch of what was possible the greatest Super Bowl ever. It's a showdown between one of the best statistical quarterbacks in the game against one of the best clutch quarterbacks in the game. Will the Giants be patriot slayers again? Or will the Patriots get their gigantic revenge? For millions of comic book fans, Sunday is the day when the new Avengers movie trailer commercial airs. It's the movie that comic book fans have desired for years but never dared dreamed could become a reality. It's Earth's Mightiest Heroes taking on the God of Evil and his army. Will Spider-Man swing in for a cameo? Or will the alien race making up Loki's army finally be revealed? While the Super Bowl is just a bunch of guys playing football around the Avengers movie trailer to some and the Avengers movie trailer is just a great time to make a beer run for others, Sunday is a big day for a lot of people. There is major hype being laid down around both events. For the past week, sports press from around the world has assembled in Indianapolis to grill Tom Brady and Eli Manning on every facet of the big game. On Tuesday, fans converged on Twitter to grill Joss Whedon, Samuel Jackson, Tom Hiddleston, and Clark Gregg on every little detail of The Avengers. (For the record, Whedon said no Spider-Man cameo.) In an unprecedented move, Marvel has even released a brief teaser of the thirty second Avengers movie commercial that will air during the Super Bowl. So of these two colossal events, which are you anticipating the most? Which event do you think will live up to the hype? Will the Super Bowl be an all-time classic or a boring blowout? Will the new Avengers commercial thrill and amaze or fall flat? Or will both the Super Bowl and the Avengers movie trailer be everything that fans are hoping for? Post your predictions in the comment section below.

Avengers Movie Trailer Vs. The Super Bowl: Which Will Live Up To The Hype?