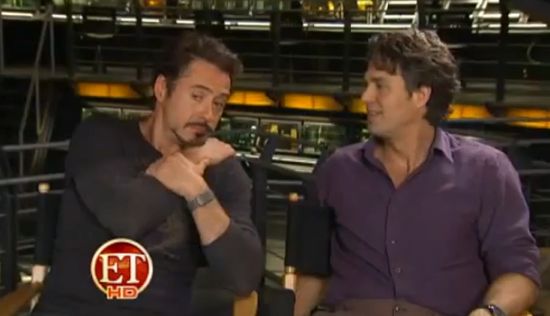 Twas the night before the new Avengers trailer, and all the fanboys were huddled round their computers hoping that Apple might upload it early by mistake. Expectations were high that the most awesome trailer ever would soon be there with plenty of Hulk and barely a Hawkeye in sight. The countdown has begun. Marvel has announced via the Avengers Facebook page that the official release time for the new Avengers trailer will be 9 AM PST on Wednesday, February 29, 2012. Of course, 9 AM PST translates into 12 Noon EST, 11 AM CST and 10 AM MST. The Avengers trailer will be released exclusively on Apple Trailers iTunes. For those that just can't wait, Entertainment Tonight has footage of a set visit plus a sneak peak of the new Avengers trailer. While the set visit doesn't really offer much in the way of new information, there is a funny tidbit where Robert Downey Jr. reveals that his primary focus in the movie was messing with Mark Ruffalo's temper to see if he could get him to go green.

The Avengers Movie is scheduled to be released in theaters in the U.S. on Friday, May 4, 2012.