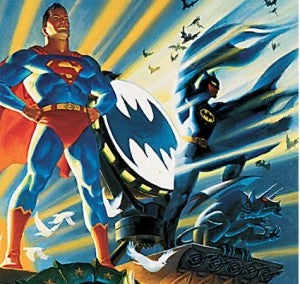 Rumors of a Batman and Superman team-up movie like the World's Finest Comics have been around for a long time. The rumors have always been fueled by strong fan desire and some legitimate past interest from Warner Bros. Now, the website Think McFly Think is reporting that Warner Bros. is quietly developing a Batman and Superman team-up movie. According to Think McFly Think, there are two different storylines being considered for the Batman/Superman movie. One version would have Batman mentoring Superman, while the other version would be the exact opposite with Superman mentoring Batman. Which version would be developed apparently hinges on if Christian Bale can be lured back into the Batman role or if Warner Bros. would have to go with a new actor. Of the two treatment ideas, personally, I think an established Christian Bale as Batman mentoring an up-and-coming Henry Cavill as Superman would rock. However, it would be disappointing if Warner Bros. had to go the other route and bring in a new Batman. I just can't see a team-up movie with Superman mentoring a young Batman working. Of course, one big question in this news is if Warner Bros. is developing a Batman and Superman team-up movie, why would they want to do it quietly? There is huge fan interest in seeing these two classic characters on screen together, and a World's Finest movie would be a great way to get Batman back on the big screen after The Dark Knight Rises. The answer as to why it is being done quietly could be because Green Lantern wasn't exactly the hit that Warner Bros. expected and Superman is in the process of being rebooted. Think McFly Think says their info comes from unnamed sources and admits the plans are not definite. There are probably a lot of DC Comics properties that Warner Bros. executives are thinking about, but with like every potential movie, a lot of other things have to fall into place for it to actually happen. Some of the current unknowns that will likely go into the equation for the Batman/Superman movie to become a reality is how the The Dark Knight Rises, The Man of Steel, and The Avengers do at the box office. If The Dark Knight Rises is the huge hit everyone anticipates, then Warner Bros. will be anxious to find a way to get Christian Bale back into the Batsuit. Of course, for a team-up movie to make sense, The Man of Steel reboot for Superman has to also be successful. And while The Avengers is a Marvel Studios movie, everyone will be watching to see how successful it is at the box office. If The Avengers winds up breaking box office records, then expect a lot of superhero team-up movies to get put on the fast track.

Minions: The Rise of Gru Rotten Tomatoes Score Is Out