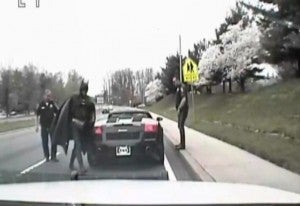 In the wake of the mass murder at a theater in Aurora, Colorado, during a screening of The Dark Knight Rises, there have been a number of reactions, most of which seemed to make some kind of sense. Theater chains have banned or restricted costumes in the theater, while Warner Brothers (the company that distributed The Dark Knight Rises) pulled the trailer for Gangster Squad out of theaters because it depicted a gangland shooting in a movie theater. This one's got us scratching our heads, though: An NBC affiliate in Chicago is reporting that a local hospital has cancelled an appearance by Lenny B. Robinson, who appears at children's hospitals dressed as Batman to cheer up the kids. Robinson was made Internet-famous earlier this year when he was pulled over while driving his black convertible and wearing full costume on the way home from a hospital appearance. Robinson is from Maryland where, earlier today, police arrested a man who had called his workplace and threatened to "shoot the place up," confiscating "an arsenal" of weapons, according to a Fox News report. The man reportedly referenced The Joker, which is both the name of a famous Batman villain and the chosen alias of the shooter in Colorado.

"My heart goes out to the family and friends of those who were affected by the shooting in Aurora, Colorado. This senseless act of violence has nothing to do with the Warner Bros' Batman franchise. At the heart of the movie is a central heroic figure that gives hope. The shootings in Colorado was a tragic event, but will not stop me from portraying Batman. I will continue to portray this iconic superhero, giving courage to sick children around the world that need it most," Robinson said in a statement.

The hospital says that they "gave it a lot of thought" and consulted with child psychologists before cancelling the appearance, and the Chicago Sun-Times story from which that quote is derived also indicates that other hospitals have been doing the same since the shooting in Colorady, but it seems excessive. Batman is, after all, a massively popular character with a nearly-omnipresent media footprint. Pretending that the character doesn't exist doesn't seem like a realistic option, whereas allowing people besides the shooter to "reclaim" Batman's imagery seems like a saner approach to overcoming the trauma of last Friday.

Batman Appearance Cancelled At Children's Hospital Due to Aurora Shooting