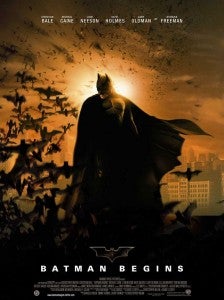 Ahead of the Dark Knight Marathon being screened at select AMC Theaters around the country, Batman Begins will be full converted into a digital IMAX format for the first time, reports Variety. According to Variety, The Dark Knight Marathon will screen at 296 theaters, including 76 IMAX screens. "As anticipation for 'The Dark Knight Rises' has risen, our guests have made their voices heard about the kind of experience they expect for this installment of what's become a legendary franchise," AMC programming prexy Robert Lenihan told Variety. "We have been working to ensure we could provide our guests an event that was truly, completely in IMAX." While the film's initial release was exhibited on IMAX screens, because only part of the film was actually shot on IMAX not all of the footage was optimized for the large-format screens. It was also screened only on film, not on the digital IMAX screens that are popular now. Ironically, Batman Begins director Christopher Nolan recently lashed out at Hollywood's eagerness to go all-digital, all-the-time in a talk at the Produced By Conference. The Dark Knight Marathon begins on July 19, leading up to a July 20 release for The Dark Knight Rises.