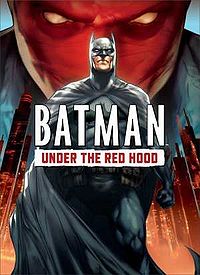 There's something wonderful about symmetry, be it in art, life, Geometry, design, and, in the case of the latest direct-to-DVD DC animated feature Batman: Under the Red Hood, a necessary and appropriate frame for a story of loss and revenge. Bringing together two of the more memorable and influential Batman stories of the past twenty-five years, "A Death in the Family" and "Under the Hood," the film crafts a kind of symmetry of its own that bridges the decades that separate the stories. Seventy-five minutes isn't a lot of time to merge the stories involving the death of Jason Todd, the second Robin, at the hands of the Joker with his improbable return to life; however, the result is a mostly effective film that works well when it comes to the action sequences and the balancing of flashback with current story. In matters of character, and the complex relationship between Jason Todd and Batman at the heart of the film, more depth to make the viewer feel the emotions could be used. The story begins five years in the past, with the Joker, played by voice actor John DiMaggio, having his brutal way with Robin, courtesy of a crowbar. A terrible explosion follows, with Batman discovering his partner's body in the wreckage, the sadness and despair in Batman's (Bruce Greenwood) voice is a nice homage to the Jim Starlin-penned "A Death in the Family". We then transition quickly into the present, where someone wearing an updated Red Hood, the guise the Joker wore before he became the Joker, costume is calling together the gang lords who currently work crime boss Black Mask, who has mercifully short screen time and isn't that important to the plot, as he is played as too bombastic and loud to be taken seriously as a menacing figure. This meeting proves to be less of an offer and more of a mandate from Red Hood, for them to turn their business dealings under his purview. The action, which is handled with slick and fluid illustration, quickly gets going when Batman and Nightwing, originally the first Robin and wonderfully voiced by Neil Patrick Harris, stumble upon a shipment that contains some "challenging" cargo, only to have that give way to a fast-paced, intricate chase across Gotham with the Red Hood surprisingly one step ahead. The illustration during these early scenes highlights the dark, somber mood of the story, with the angles and harsh lines of the city paired with the flashy and acrobatic chases and fights bringing a symmetry of its own to the story. After some clues are dropped, Batman begins to suspect that he knows who resides behind the hood. All this focus on action seems surprising, as the moments when the story brings its gravity and heart into focus are the moments between the fights and chases, as Batman begins to flash back to his training of a brash, young Todd, who early on exhibited a sense of justice that proves to be at odds with Batman's inherent sense of never crossing a line into vengeance. Here again, another wonderful sense of balance is present as we see Jason grown up. As Black Mask sputters and bleats to find out what's happening to his criminal empire, they real story, and mystery, of if Jason Todd is actually the man underneath the hood intensifies, and there are some fine scenes of Batman attempting to rationalize away what he knows might be true, leading him to a well-written scene with cunning villain Ra's al Ghul, whose connection to those events that caused Jason's now apparent not-death is revealed. More fighting and slugging it out takes place, and the Joker becomes involved through an intricate plan involving the Red Hood, who now has the Joker right where he wants him. The big battle between Hood and Batman takes place, and everything that the film has been driving towards with the emotional weight between these two characters, with Joker watching, comes to fruition. It's a fantastic scene, as Red Hood/Jason Todd and Batman explain their motivations and actions to the other, with the emotion of the scene coming across convincingly. The only thing that keeps it from being more meaningful is the lack of more scenes like this earlier in the film, where we get to see more of the relationship at its start and through its development. We understand, to some degree, what Jason's motivations are, but we don't see how it came to be. The film ends with some appropriate loose ends, and a future movie based on this one would not be out of the question. As a whole, Batman: Under the Red Hood" can be viewed with the same sort of duality that much of the film itself relies on. As an action film, it wholly works. The fights are intricate, interesting and move with a grace that many live action films could employ more often. As a film about character and the emotional depth between Jason Todd and Batman, not enough is explored to make it as meaningful as it could have been. Those carefully and symmetrically employed flashbacks and the revisiting of particular places in their shared history help, but more is needed to make it feel like it should. The cast as a whole delivers, and while John DiMaggio has an effective voice for the Joker, many fans will always think of Mark Hamill. Jensen Ackles makes an effective Jason Todd/Red Hood, and that's made especially clear in the emotional final scenes of the film, with Greenwood's Batman also an appropriately dark addition to this film that, overall, makes for a watchable experience.