The first official footage in support of Zack Snyder's Batman V Superman: Dawn of Justice was released tonight, and...well, it didn't tell us much.

The 20-second teaser for Monday's IMAX screenings of the trailer gave us looks at both costumes -- but in relative dark, and without a person wearing them.

So, that couldn't tell us anything about the film, right?

Well, we thought it could be fun to see what we can extrapolate from that little bit of footage...

Still very percussive, although with more of an electronic sound to it than Man of Steel had. That's probably the contribution of Junkie XL (you can see our interview with him here).

I can't see it myself, but my editor and several fans online say that the logo looks slightly different. Obviously, the texturing and rendering is a bit different, but it doesn't look like the slightly more rounded ones that have popped up on purported cast and crew jackets and the like.

The background of the "S" shield is very obviously yellow. It was in some of the promotional material for Man of Steel, too, and even a few shots in the film seemed much more yellow than the rest, but for the most part it looked black.

Behind the suit is a background that looks very alien. Is it Kryptonian? Is it even from the film, or is it just symbolic?

After all, as far as we know, all of the Kryptonian artifacts save Kal-El's ship have been confiscated by the U.S. government following the battle in Metropolis in Man of Steel. That suggests that Superman doesn't have closet space in a genuine Fortress of Solitude unless there's something fairly big we don't know about the new film.

That said, the repeating pattern of relief and light makes it reminiscent of the chamber in which Superman found the corpses of the Kryptonian outpost he appropriated during that same battle... 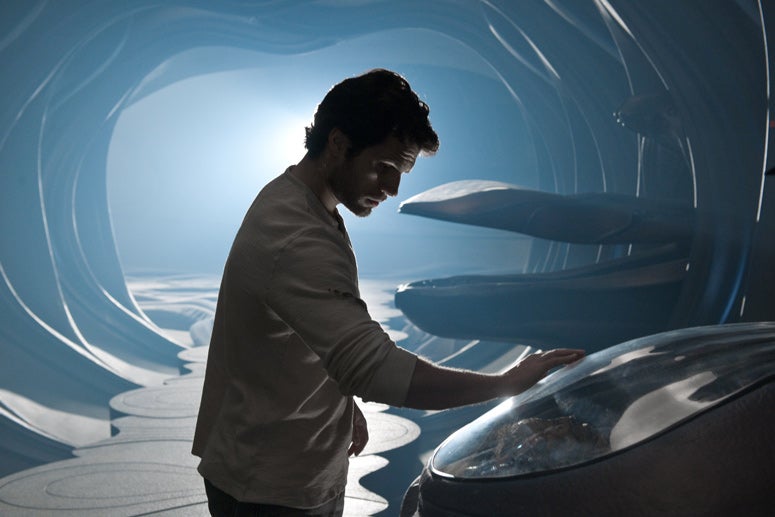 Here's the thing: it could be that, since I'm guessing these glamour shots of the costumes aren't actually footage from the film, this setting doesn't have to be literal. It could be about setting him up to seem more "alien," a theme that reports have suggested will be played up in the film (and one that matches with David S. Goyer and Zack Snyder repeatedly calling Man of Steel a "first contact" movie).

Note: Here's a comment from Jason Kopena below, which I believe to be accurate:

The shot of Supes' suit is from MOS, it's not the suit from BvS. It's the scene when Jor-El first shows Clark the suit in the scout ship.

While both suits are relatively obscured by shadows, the Superman suit was much more visible under light and seemed almost to "shine." The Batman suit, by comparison, clung to the shadows and seemed to be filmed in black and white. That's all likely quite intentional.

The Batman suit is basically what we've already seen. This confirms that the headpiece does indeed look molded to have a scowling, furrowed-brow look to the character. The hard blue, black and white light also gives it a distinctly "dark" feel compared to Superman's, and the idea that Batman is a character who could cling to the shadows is something that you can feel for the first time really since Batman.

The whole costume feels more organic, with an animalistic face and a suit that's almost certainly rubber but looks almost like distressed canvas.

Whatever that background is to Batman's costume, it's interesting. If you look at it close up, it has the affect of that very Ikea-inspired, modern, modular kind of storage that Christopher Nolan's Batman films utilized in the Batcave.

Backing up a little, though, the repeating designs, the almost skeletal look of the relief on the walls and the color scheme evokes an almost Victorian feel, and my first instinct was to wonder whether that could be indicative of the look they're going to go for in Wayne Manor.