It's official: the Man of Steel sequel is titled Batman v Superman: Dawn of Justice. Production is already underway, and a website is active for the film, with at least one social media site open (the Facebook page where the official press release dropped). The obvious parallel, of course, is Captain America: The First Avenger, the final film produced during the first phase of Marvel Studios' Avengers universe prior to Marvel's The Avengers. That film was titled specifically to set up expectations for what came next and to connect the Captain America audience to the next installment, and to motivate people to be more excited for Cap because it promised a big story ahead. Batman v Superman does the same thing -- we get a subtitle that clearly teases what's next (and, again, for those already in the know it's not news, but for many casual viewers it's probably the first they're hearing about Justice League). "Justice League" is a recognizable brand -- arguably more so than The Avengers were prior to their film being released -- and casual viewers will likely catch on to the implication of the word "Justice" in the title. 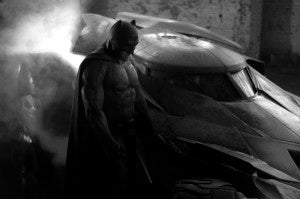 And for those not thrilled with "Dawn of Justice," t least it isn't "Cry For Justice." Just think on that prospect for a moment... That Batman's name comes first is implying to many that he'll be a major part of the film, in spite of early claims that his role would be fairly small since this is, after all, nominally a Man of Steel sequel. Whether that was true and things have changed, or it was never true and they just didn't want to tip their hand regarding a Justice League lead-in isn't yet clear, but it doesn't change a ton since nobody much believed it anyway. Of course, there's also the option (unlikely as it seems) that it's still true but that, somehow, marketing is playing up the Batman and Justice League elements while the script itself remains Superman-centric...but given the fact that the last time they denied a big Batman role, the movie hadn't been rewritten by a new name yet, it seems likely some things have changed along the way... There is presumably something to be said for the idea that if this is the "dawn of justice," it's unlikely the DC Cinematic Universe had a World War II-era Justice Society, but given the connections between the New 52 and the current crop of movies, it's unlikely anyone thought that was going to be included anyway.

Batman V. Superman: Dawn Of Justice - What The Title Tells Us