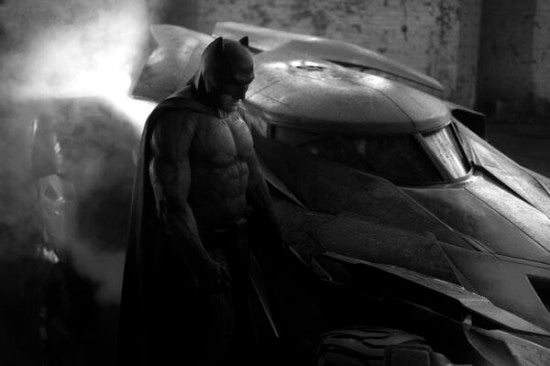 Following up on yesterday's tease from director Zack Snyder, Warner Bros. has released a first look at the new Batmobile from the as-yet-untitled Man of Steel sequel tentatively titled Batman vs. Superman. Back in March, Snyder admitted that theBatmobile was finished (after early, apparently-erroneous reports that scenes had been shot with it earlier than that) and that the rumors have been persistent for some time that it would be Cadillac-inspired, much more car-like than the tanks of the Nolan trilogy, and more similar to the current Batmobile in the Batman: Zero Year storyline. Meanwhile, Affleck's Batsuit was being fitted to the actor's new, bulked-up form as recently as March. Yesterday, costume designer Michael Wilkinson said that a reveal would be coming along soon. 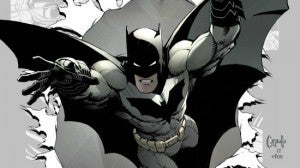 One of the longest-standing and most pervasive rumors was that it would would be based loosely on Jim Lee's Batman redesign for the New 52 -- that certainly looks true (see right). Even with today's Batmobile and Batman reveal, that still leaves the lingering question of when fans will get to see Gal Gadot's Wonder Woman duds and whatever tweaks the costume designers have made to Henry Cavill's Superman. It could, at least in theory, be revealed all at once, but if so, that seems like a Comic Con reveal (or at least a Friday, to be an Entertainment Weekly cover).  Still, costume designer Michael Wilkinson yesterday told a fan on Twitter that the reveal would be "not long now." Based on what little we saw of the Batmobile yesterday, ComicBook.com ran a story last night speculating which previous Batmobiles from comics, TV and film might have played a role in influencing the Caped Crusader's custom car. Which influences do you see in the final design? Batman vs. Superman is planned for a theatrical release in the U.S. on May 6, 2016, slightly earlier in the international market. It's in production now but filming is expected to begin in earnest later this month.