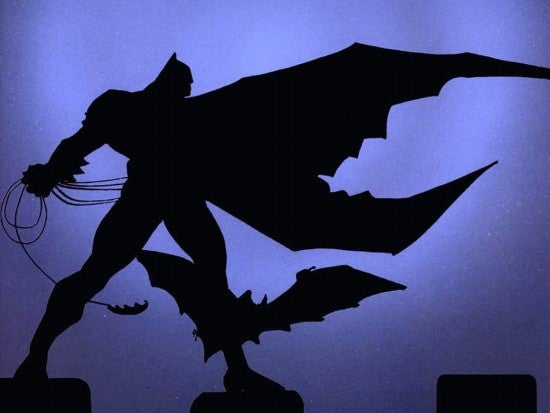 It's a fact well-established in Hollywood that while comic books provide a weatlth of rich source material for film and TV adaptations, there are some things that work far better on the printed page than they do in live action. That's why, in the course of his 75-year history, Batman has had a number of costumes that might look pretty cool in the comics, but which really wouldn't work at all on the big screen. With word coming down that the Batman costume in the forthcoming Batman vs. Superman movie will be unlike anything we've seen on screen before, what are some of Batman's cooler, more out-there looks that Ben Affleck will almost certainly not be sporting come July 2015? How about... 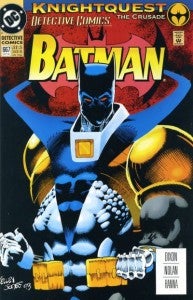 The Knightfall Costume After Batman broke his back, an unstable supporting character named Jean-Paul Valley briefly took on the mantle before getting so totally out of control as Batman that Bruce had to reclaim the title literally hours after he was able to get up and walk again. I'll say this, though; Jean-Paul's costume was sharp. It was, in fact, something that I always expected to see pop up in a movie just because the armor, the gadgets and the full-facial mask seemed like they would look just awesome onscreen. The problem? It's really kind of an absurd costume. The first reveal would be like, "Holy s--t, that's awesome," but a few minutes later fans would have to start asking how in God's name anybody would ever think that was a practical crimefighting costume, let alone one that could weather the massive storm of fan criticism leading up to the film's release. Oh, and the fact that Christopher Nolan just did a kind of hybridized version of a Knightfall movie might make it difficult to reconcile with longtime fans that these aren't the same universes. Gotham By Gaslight 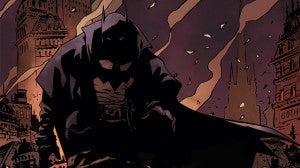 A fan-favorite Elseworlds story, Gotham by Gaslight almost became a video game, because its look and tone are so nearly-flawless that it seemed like a good way to put a new spin on the Dark Knight for casual fans. The costume is realistic and practical-looking... ...which is probably part of why we'll never see it in live-action. "Practical" doesn't sell a lot of action figures and coloring books. There's also the fact that it's specifically set up as a "theme" costume to fit into the surroundings of the Gotham by Gaslight world, and wouldn't work quite as well outside of that context. Not that it wouldn't still be cool, but the idea of a giant, baggy trench coat is... ...well, it's actually probably more practical than a cape, isn't it? Hmm...! 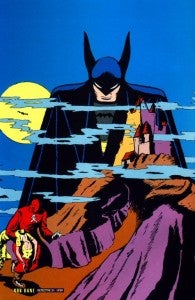 The Bob Kane suit The short, purple gloves, the big ears and comically poofy cape? Yeah, probably none of that would translate all that well to the big screen, unless you wanted to specifically do a Year One-style story where we saw Batman's growing pains. There's also the fact that Greg Capullo recently redesigned the Kane suit to fit more with the aesthetic of Batman: Zero Year, which means if there were ever a desire to do an origin story, to flash back or even just to use the Kane costume, they've got one ready-made for the cinema, with all the requisite kevlar and texturing and nifty stuff that makes it look like "more than just tights." Kingdom Come As much as some of the recent clues have pointed to "near-future" stories like The Dark Knight Rises and Kingdom Come playing a role in Batman's characterization in Batman vs. Superman, it's unlikely we'll see anyone go fully into one of those worlds for a number of reasons. 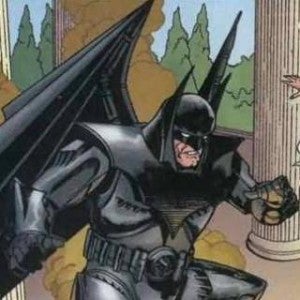 The Dark Knight stories are problematic in that Miller's interpretation of Batman is one of the definitive looks at the character, but virtually every other DC character is treated poorly. Because director Zack Snyder loves Miller's work, we're certain to see elements of that playing through the film...but it won't be the sole voice. Of course, that's neither here nor there as it pertains to the costume, which might very well turn up in the movie, since it's basically just a broad-shouldered version of the standard Batman suit. What we likely won't see is the costume Batman wore during Kingdom Come, which is...well, basically a suit of armor. Batman was physically disabled in that story, having spent years putting his body through untold punishment as part of his war on crime. The result is that when we first see him, he's not out on the streets at all, but controlling Bat-robots from the cave by remote. That's something we might see a little of in the film, according to a tweet from a producer with ties to Warner Bros. But an actually old Batman who really doesn't get his hands dirty? No way. Ben Affleck isn't getting in shape so that every inch of his body can be covered in armor. Pirate Batman 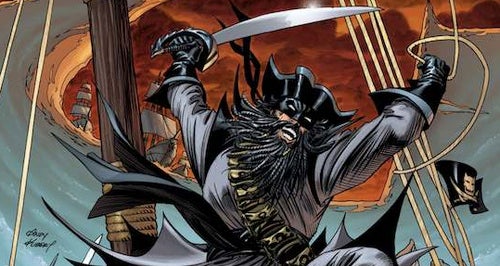